THE SPIRIT OF THE RADIO

I was determined from the beginning that the SNR's communication system would not be by radio. Although radio had become very popular among modelers, and also inexpensive and easy to implement, simply put:  in 1952, nobody but the Pennsy had radios available to their crews.  "The Spirit Of The Radio" is for friends with layouts in more modern settings.  (It was also the song that Rush opened with, on their Grace Under Pressure tour in 1984.)

Nope, in olden times, the dispatcher only had limited ways to contact crews on the road.  One was to have an agent drop a train order signal.  Another was to tell a crewman who'd already called in, to stand by that same callbox or agency.  After that, timetable & train order was it - and crewmen never even talked to the DS.  And no matter what, you had no way to hear other crews, or divine what they were up to, or where they were sitting.

So I wanted the SNR to have some sort of a telephone system, in keeping with the era.  In the beginning, my friend Darren Williamson, a.k.a. Tech Man, developed a party line system, by converting old-school, bakelite handsets with high-impedance mics to "push-to-talk".  (It helped that he had a big cache of those handsets onhand.)  After that, string some wire, add a 12v transformer, and install a buzzer system for the DS and the fixed positions (Segway and St. Amour) to use, and we were in business.

This system worked great for a number of years, in both houses.  However, several years ago, our friend Brian Field (Kentucky & NorthEastern), who has lived with Type 1 diabetes for almost 50 years, began to lose mobility, to the point where he could no longer make it down to my basement to operate. 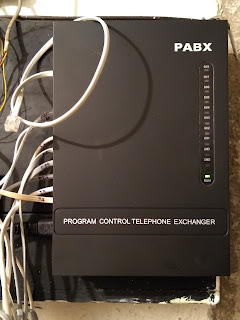 So Tech Man (Darren) proposed a solution whereby we would be able to have Brian dispatch the SNR remotely, from his house across the river in Kentucky.  Darren's solution was simple, and ingenious:  a PBX - Private Branch Exchange - which basically implements an office phone system in the basement.  By connecting the outside line (the looped cord in the upper left corner above) to a nearby modular jack on the house line before the op session, crewmen could place an outside call to the dispatcher in another state just as easily as placing one to the laundry room. 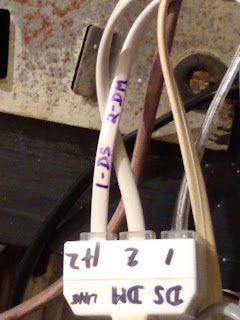 Sounds like a big deal, but actually the PBX itself plus eight handsets ran less than 200 bucks.  And everything was modular - could be connected with molded RS11 plugs, and/or, we could install plugs on 4-wire cable with a simple tool.  With splitters, we could run two lines through one 4-wire molded cable, as above.  We used all these solutions. 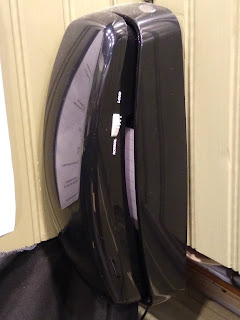 The handsets were dirt-cheap.  We went that route just to get started, and for proof-of-concept. But importantly, they still included three programmable speed-dial buttons.  So we simply programmed one of those buttons with the number for the dispatcher's desk in the laundry room (1), and a second button with the full sequence for Brian's phone number, including the dial-9 for an outside line.  So the vast differences in dispatching options were transparent to the crewmen - it was either one button, or the other. 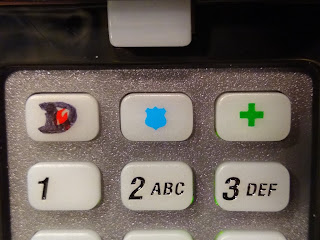 We programmed the speed dial on the "fire" button to call the dispatcher's desk, which is extension 1.  This proves to be easier for crews to remember than the specific extension number.  A "D" made with a Sharpie went a step further towards idiot-proof.  We programmed the "police" button to request an outside line and call Brian's cell phone.  I made "a copy of the home game" for Brian to use, which was a duplicate of the magnetic dispatcher's board with train tiles.  As long as crewmen follow the rules and always contact the dispatcher for clearance, the system works great - and allows a friend who can't physically be there to still be a part of the fun.

"THE CALL IS COMING FROM INSIDE THE HOUSE!"

With the PBX, you're actually placing a telephone call to the dispatcher.  So that means it's two-party, person-to-person synchronous communication - and nobody else is privy to it.  That fact alone increases the apparent size of the layout, because you can't eavesdrop.  You just have very little idea what anybody else is up to, or where they actually are on the railroad - often even when they're in the same layout room as you.

That two-party call also means the DS's line might be busy.  You can't step on another conversation with the PBX - just hang up and try your call again later, like life.

For the dispatcher's phone, I use a retro, Andy Griffith-looking thing, just without "Sarah" answering.  But because it's all modular connections, I can also use a cordless phone, which I've installed as well.  This allows the dispatcher to remain available even when he's kibitzing in the crew lounge, railfanning in the train room, or 10-6 to the head.  It's also helpful when the host is doing the dispatching, so he can run upstairs to let the dogs out, get more coffee, meet the Fed Ex man, or grab the lunch setups. 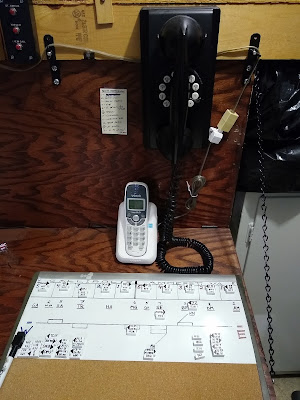 ONE IS THE LONELIEST NUMBER

This particular PBX can handle up to 8 lines.  Each line is given a single-digit extension number, 1-8.  So it's theoretically possible that a crewman could call another extension, by dialing its number.  However, the crewmen don't actually know this, nor do they know the extension numbers - and what they don't know won't hurt them.  This is another great reason to have a speed-dial button programmed with the dispatcher's extension number, too.  It takes the whole dialing option off the table logically - and hey, crewmen should have no need to talk to anyone but the dispatcher anyway.

Here are the callboxes on the SNR.  Each handset can have one of three ring tones, so I configured them such that phones near each other all use different selections.  The stations are numbered from east to west, starting with the DS office in Amherst, Va..

Ultimately a signal system and CTC will reduce the need for voice traffic and all of this infrastructure to near zero.   But that's a long way off.