The Story of Cardiff

Cardiff, Va. is a staging yard in a hermetically-sealed sarcophagus, shoehorned into the boiler/utility room, along the front wall of the house.  The 4-track yard also includes Pineville, Ky., which is the yard and maintenance HQ for the Kentucky & NorthEastern RR. 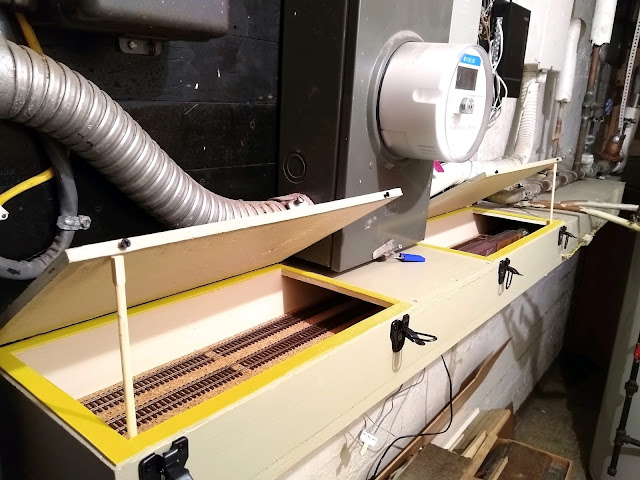 It's common lore that the first rule of Fight Club is "you never talk about Fight Club."  However the lesser-known second rule of Fight Club is "all layouts need more staging."
The SNR is certainly no exception, however we are particularly up against a wall - specifically, poured concrete walls - when it comes to finding room for it.  The main staging loops would be difficult to expand, and negotiations for further real estate in the laundry room to date have not gone particularly well.
I had always been intending, with the construction of the wye at Bryan Ferry, that a single storage track for the K&NE transfer, to their yard at Pineville, Ky., would extend into the utility room.
Before I could get the wye extended, however, I had decided to remove the coal traffic from Yaeger Yard, other than one shifter.  When we began operations, I had all the mine run coal on the district running through the yard at Segway, as well as all the merchandise cars.  This led to an overload of traffic in the yard, and some not-too-enthusiastic yardmasters.
So I pulled most of the coal traffic, which made for happier and more willing yardmasters, but I needed somewhere to originate mine runs from.  See staging discussion above.  So I thought, what the heck, why not make Pineville a staging yard, and call half of it a just-slightly-offstage coal marshalling yard?  It would be short-ish, but the mine runs (other than HC-39, which already operated out of the main staging loops) were typically 8-9 cars, so it would work. 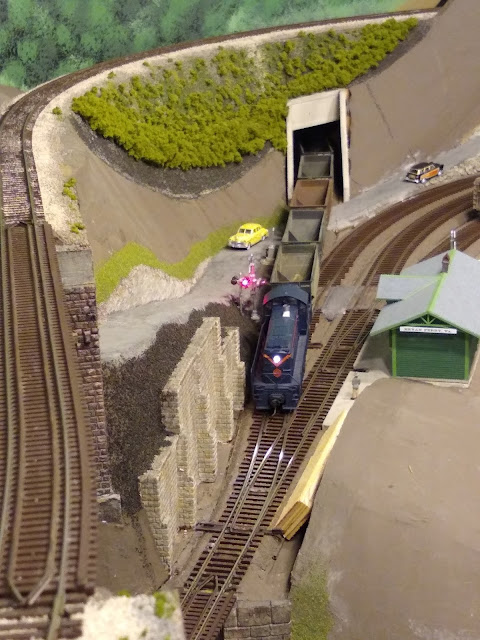 FS-43, the Misty shifter, comes in off the K&NE wye from Cardiff,
at the scenically-challenged junction town of Bryan Ferry, Va..
Here's the challenge.  The utility room is clogged with... well, utilities.  And they form the archaeological record of infrastructural changes to a house that dates, coincidentally, to the same year as the railroad is set, 1952.
These include:
So, all this was a geometric challenge enough.  But then you add the kicker:

➜ The room has a louvered window, allowing the boiler to combust outside air - meaning it's open to all manner of things quite unfriendly to model railroad equipment, especially extremes of temperature, humidity, and dirt.

This beast was not only going to have to duck and dance around many things, it also would need to be tightly sealed against its environment, including its switch machines.
But hey, nothing like a challenge!  Here are construction photos, with it seen sitting atop the pool table upon which it was built: 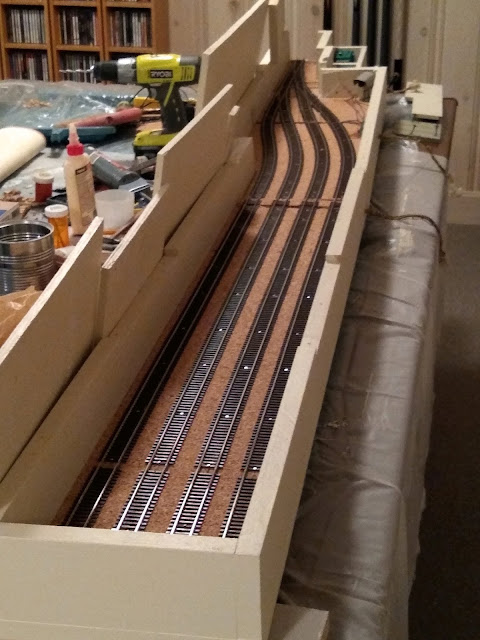 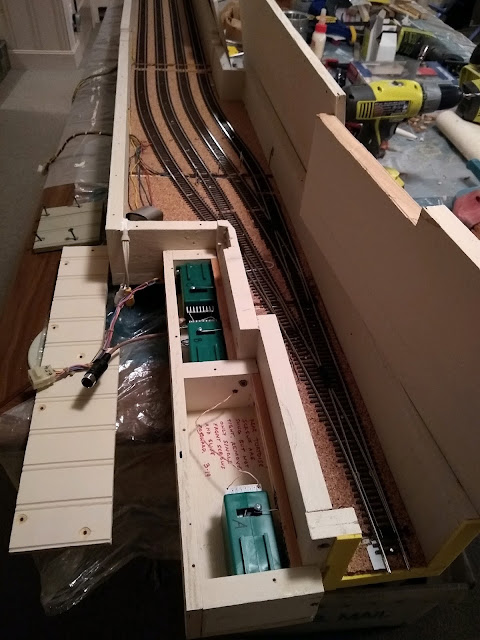 And here it is installed, with some helpful identifiers of the items that needed to be dodged: 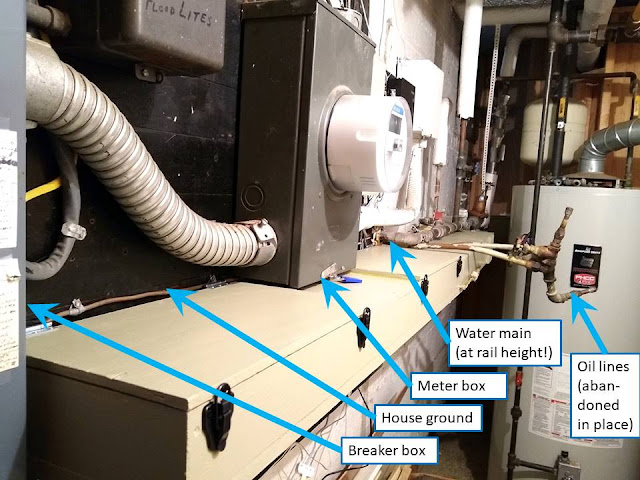 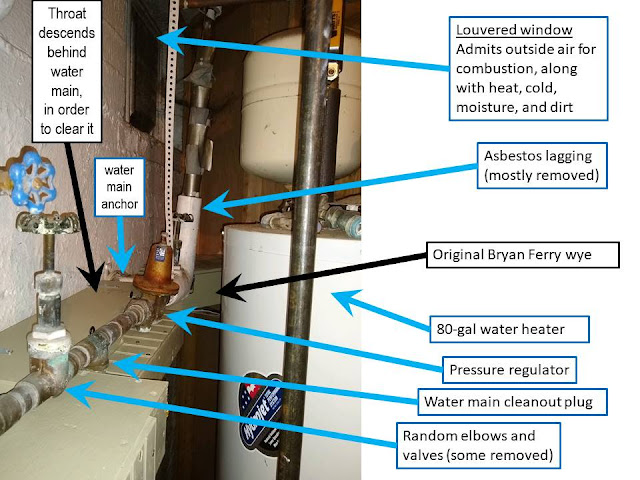 Without an "Al Capone's Vault"-style incursion into the utility room, the only contact any of us have with the trains way back in that vessel is via the monitor at Bryan Ferry. 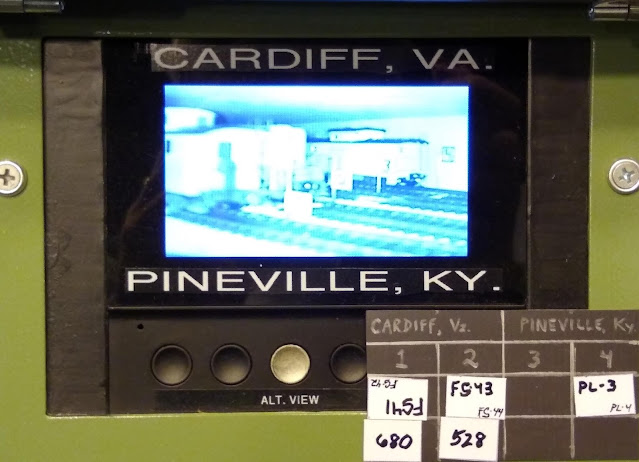 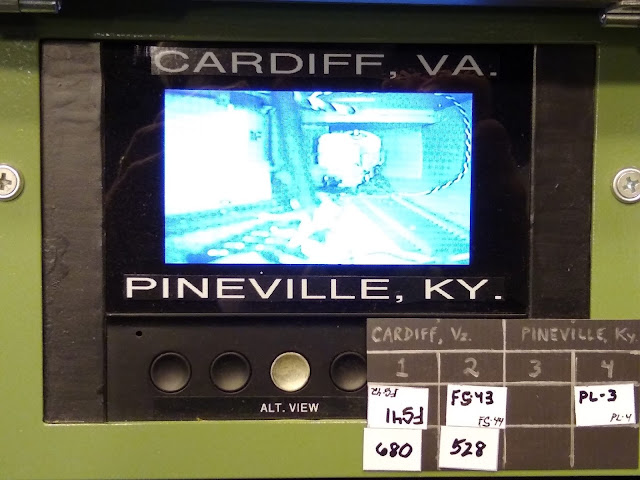 Interestingly, because the yard, lead, and wye are sealed so tight, when you acquire and start up an engine back in staging, the sound carries so well it sounds like it's right inside the underpass, rather than 12' away down a gopher hole.
I worked hard to make it bulletproof, though, and knock wood, it has done well so far.  We have only had one or two wrinkles during ops - one stall, and a switch thrown under a running train.  That last was the worst - as you can see, there are only limited access hatches, and the switches are permanently covered.  But fortunately that was just first-time operator error, and the crews are all pretty used to it by now.
The bowl end and the wye are pretty well permanently installed, but the section between them, with the switches and switch machines, is designed to drop down for removal if necessary, with minimal destruction.  It has clearly marked screws, rail joiners accessible through the hatches, and plugs for the wiring, with nothing but gaskets connecting the sections.   Still one would really rather not do that if at all avoidable, and to date, it has not been necessary.  (Did I say "knock wood" already?)
The great thing though is, there are more trains coming in from off-stage now, and using the wye at Bryan Ferry.  Totally worth the effort.