My friend Dave Keith, Sn2modeler.com, said when I first showed him around the SNR:
"So what you've built is a brand-new 1970's model railroad."

And on reflection, I had to agree.

I've finally come to realize that the bug that bit in 1974 was not model railroading per se, but the model railroads that existed when I fell in love with model railroading.  Call it living in the past, but the cutting edge doesn't often interest me.  Scratching an itch that started itching decades ago does.  It's the same reason I love old houses, tailfin cars, Led Zeppelin, and steam - it's because they came before me, and were already nostalgic and therefore cool by the time I started paying attention.  It's history.  Clearly I'm a youngest child.

That said, here are a couple of pioneers, books, and experiences that formed the way I look at model railroading. 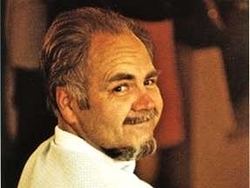 The builder of the Gorre & Daphetid, he was "The Wizard of Monterey."  He built a creative freelance railroad with a rationale for everything, operations was his primary goal, and he had a wicked sense of humor.  That's pretty well the trifecta.  I knew about him and the G&D since just after it was destroyed in the 1970s, but became a junkie when I got the 1982 book by Linn Westcott.  I've read it dozens of times, to the point of destruction. 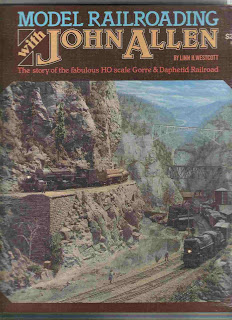 I actually have owned two copies.  A friend borrowed my first one for a course he was teaching at a community college, and when it "walked off" with a student, I said not to worry - I'd been through it enough times.  Nonetheless, he bought a replacement for me anyway, knowing how central it was to my version of the hobby, based on how often I quoted from it. 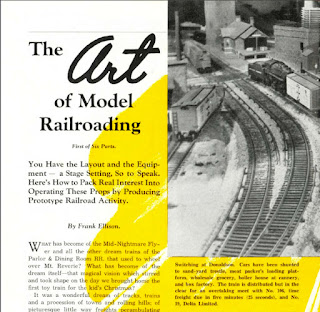 FRANK ELLISON
I had the good fortune of having just started a subscription to Model Railroader in 1976, when as part of their Bicentennial tribute in the July issue, they reprinted Ellison's "The Art of Model Railroading" series of articles from 1944.  I was just a pre-teen, but here was a voice from long before I was born - an actual adult - describing how to thoroughly enjoy a model railroad by operating it like the real thing.  No stuffy model contests here - what you wanted were models that ran reliably enough to support operations, and "plausible" was accurate enough.
Ellison quoted Shakespeare from the start, saying, "All the world's a stage."  He then went on to describe operations as a drama, with the layout being the stage, and the trains as the players.  This was probably the earliest influence that got me to looking at the complete breadth of the hobby and not just the model building.
As he said, operating a railroad is "...well, gosh, man - more thrills per minute than a game of strip poker." 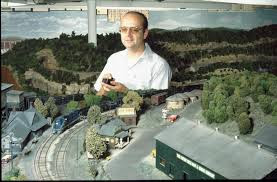 John Allen and Frank Ellison validated the performance-art nature of a freelance model railroad with operation as its focus.  Allen McClelland with his Virginian & Ohio elevated it to art and science combined - "proto-freelance", where the fictional railroad follows not only real prototype practices and operations, but geography and the actual railroad landscape as well.
So let me get this straight - I get to create (OK, make up) and justify an entire fictional railroad, including its map, history, predecessors, competitors, owners, customers, finances, and vendors - then I get to build it - then I get to have friends over to run trains on it with me, according to a schedule rationalized by all of the above?  Where do I sign?  That's as good as it gets.

Oh and then you add in Allen's "good enough" philosophy.  You have nothing you have to prove with the modeling when the whole point is the operation.  Liberating!

The SNR is a pale imitation of the V&O, but it owes its lifeblood to the concepts and creativity of the route of the RidgeRunner.  I missed getting to operate on the V&O, despite its having been just an hour away up in Dayton.  But I'm incalculably lucky to have ended up knowing Allen, and getting to operate V&O equipment with him, on Gerry Albers' Virginian Deepwater District. 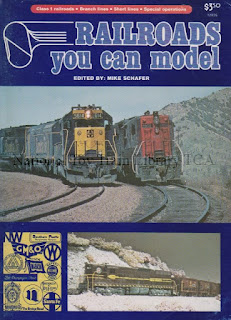 This book, probably more than any other, shifted my interest from just model building, to re-creating - or better said, imitating - the prototype.  To this day, I don't regularly read model magazines - I read Classic Trains, and the C&O Historical Society's bimonthly magazine.  To me, recreating a bygone era is what it's about - and the era, and how things happened in it, is more important than the technique of the re-creation.

I had this book memorized, and not only can still quote from it, but phrases from it infected my own developing language as a young man, and are still there.  When I leave for the office I'll often tell my wife Barri wryly that I'm off for "the commercial fray", which is lifted directly from the first line of the Aberdeen & Rockfish chapter.  She will usually reply with something like, "Be careful in the commercial fray."

When Barri and I were dating, her parents had just moved to Reno, Nev. from Cincinnati.  On one of my trips out there to visit, my future mother-in-law Nancy and I saddled up her '89 Taurus, and off we went into the desert sun to chase the roadbed of the Virginia & Truckee, from Virginia City to Carson City and up to Reno.  And of course, the V&T article from Railroads You Can Model was the guide.  Nancy was thrilled.  Barri was non-plussed.  But hey, her loss.   Not something you see every day. 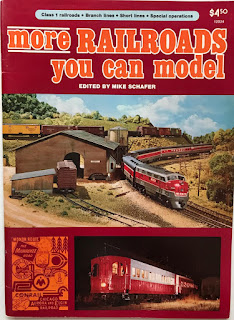 MORE RAILROADS YOU CAN MODEL (ed. MIKE SHAFER, 1978)
Ibid.  Second verse, same as the first.
Here's one example from this volume:  I've mentioned Cresson, Pa., and Cassandra, Pa. - on the crew's first visit to The Station Inn, in 1999, it was the Horseshoe Curve article from this book that became our guide to railfanning the area, including Gallitzin and Altoona.  Largely because I had it memorized. 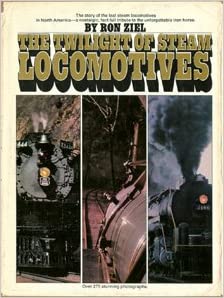 Steam had always fascinated me for steam's sake, but the fact that I had just missed out is what cemented it as therefore superior.  This book was the precursor to today's feedback loop of reinforcing ideology - the more times I read it, the more convinced I was of the tragedy of steam's loss, and the more I wanted to model an era I'd never seen.  This is another book I can still quote, and whose very language infected my own and is still there in daily use.

This is also another book of which I've possessed two copies.  The first was a friend's in junior high, who lent it to me, probably not expecting I would keep it for a couple of years and read it 30 times in the interim.  Whereas, I was probably not expecting him to miss it.  Finally he sort-of-casually-not-really asked if I was done with it yet, and I was forced to grapple with the fact that he did miss it, and, I was abusing the privilege.  A few years later I managed to find and buy another copy of it to keep (even before eBay!).

Hey Danny M, if you're reading this, thanks man.  Your book was a life-changer. 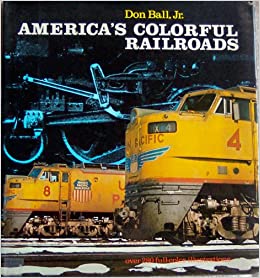 What Ron Ziel did to me for steam locomotives, Don Ball did for fallen flags, first-gen diesels, passenger service... and steam locomotives.  The entire book is composed of slices of life from just before I was born - all captured in gorgeous Ektachrome, whose blue-shift told you it must be cool.

And this is yet another book I've owned two copies of.  The first I read so many times the binder literally disintegrated, and I was left with several hundred 12x10 color glossy placemats.  ("...With a paragraph on the back of each one," as Arlo Guthrie would say.)  So I bought a new copy - but when I consult it now, I find myself still using the disintegrated pile of placemats, so that I can keep the new copy "nice".  (?)  It's like when your mom wouldn't let you sit in the living room, with all its generous space and comfy seats - because it's "for company".

Anyway.  Once again, the model building is proven to be a means to an end, rather than an end in itself.  The model trains and the layout are the tools with which to imitate lost eras - and as we all know, imitation is the sincerest form of flattery. 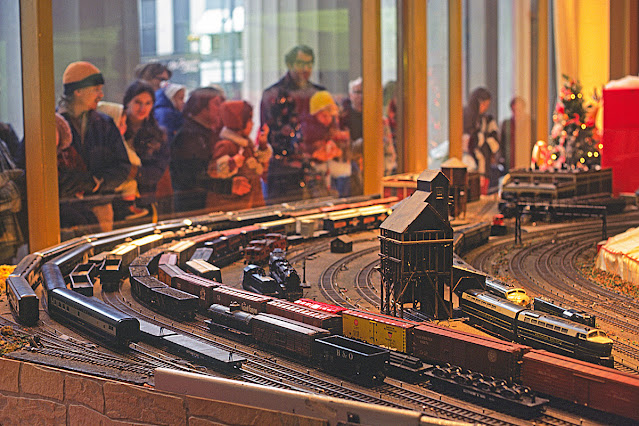 This is where it all started - the original bug bite.

My dad worked for CG&E, downtown at the 4th & Main HQ building.  Each year for Christmas, CG&E set up in its lobby a very large operating O scale display layout, that had originally been constructed by the B&O to demonstrate the advantages of CTC.  "Three Tracks Do The Work Of Four" the flyer said.

My entire life, the single greatest day of every year was the first day of Christmas vacation, when Mom & I would go downtown, meet Dad, watch the trains, go out and eat lunch - in a real "businessman restaurant", then come back and watch the trains some more.

It's a bit like Ralphie in A Christmas Story, describing the big annual trip downtown, with his nose pressed against the department store window watching the toy trains.  Except - this wasn't tinplate silliness - these were scale models accurately depicting a point in time on a specific railroad - the Baltimore & Ohio in 1946.  Also, you weren't stuck out in the cold - while you could see it all from 4th St., the best viewing was inside.

And it was all there - every B&O icon you could expect.  Working color-position signals, wagontop cabooses, wagontop boxcars, Sentinel boxcars, Timesaver boxcars, EM-1 articulateds, President P-7 Pacifics, shovel-nose EAs, Sharks, war-emergency hoppers, blue and grey passenger trains, and on and on.  All that's on top of the already amazingly cool baseline of an operating model railroad.

I loved all of it.  Still do.  In layout planning I gave serious thought to just modeling the B&O, but I had the freelance story needing to be told.  Still though, several each of the three boxcar examples are to be found on the SNR, as are color-position signals.  I went as far as wagontop cabooses too, but ultimately had to sell those off.  They were just too iconically B&O, and uncomfortable to rationalize on a freelance road.  But I kept the CPLs.