As established, on the Suffolk Northern, it's always 1952.

In fact, year in and year out, the railway's message on the back of the New Year's card never changes.  Makes it kind of a running joke: 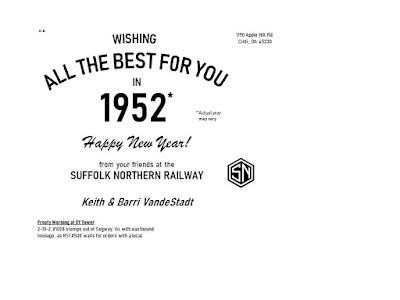 When most layout owners print dates on documents for their railroads, they will use today's date plus the year the layout is set in.  Problem is, that doesn't tell you what year (in reality) that document was created.  I like to see the history of things, so I wanted to find a way to track when something, or some version of something, was actually created.

My friend Paul Miklos (B&O Chillicothe Sub) rolls the date sequentially, starting at January 1, 1958.  This is ingenious, and you can always tell where in the ops history any given order, timetable, supporting doc, etc. was created - at least, in the sequence of ops.  Incidentally, he operates typically once per month, with three op sessions (tricks) per calendar day.  I think we've made it as far as January 9th or 10th now, and Paul's pretty confident that his winter scenery is not going to need to survive past March. 😀

I was looking for something a little more specific to the year, so I came up with the following format.

It's not specific down to the day, but that's not critical - I'm not that exacting, and anyway, I typically operate once per month, so it's the month and year that are the most important.  I have to say it's pretty cool to look at the oldest timetable on record, for example, dated 10-5-52.  That's not 7 months from now - it was nearly 16 years ago.

It's a rush to see that kind of history.