During an op session on the SNR, we run trains by sequence.  We don't go so far as to use a fast clock, but the sequence is critical, as the staging yards have about zero room for error.  They're a lot like the bunks on a submarine - there are only enough for 1/3 of the crew, because they sleep in shifts.

I laid out the "schedule" in the form of a string diagram, to help the dispatcher visualize what goes from where to where.  Originally I had all the meets carefully choreographed in this format, into an elaborate ballet where far more trains than the railroad ought to hold, daintily tiptoed their way past one another in a beautiful pas de deux which left observers breathless.  Or so I envisioned.

Trying to plan a dance at that level both took away a chunk of the dispatcher's job, and, made it harder for him at the same time.  Movements were so integrated that if one job ran long, he was almost certain to create chaos by "calling an audible" and deviating from the plan.

Poor Bill Doll (Forest Park Southern) once spent an actual hour and a half in the hole with the Three Rocks turn, waiting for a parade of trains that all had to pass each other in the grand melée - er, waltz - from which little deviation was possible, because we were out of dance floor.  He doesn't like to let me forget it, either.  (Actually it was more like 20 minutes, but you know how dogs get shaggier every time the story is told.)

So the "schedule" now primarily shows the relative sequence of the jobs, and only shows meets where one is critical (someplace) in order to open up a staging track.  Crewmen don't need to digest these diagrams, only the dispatcher.  It does make nice wallpaper though, for something to read when you're stuck in the hole at Three Rocks for an hour and a half.

And for the visitor, it provides a general idea of what kind of traffic will be seen in a session. 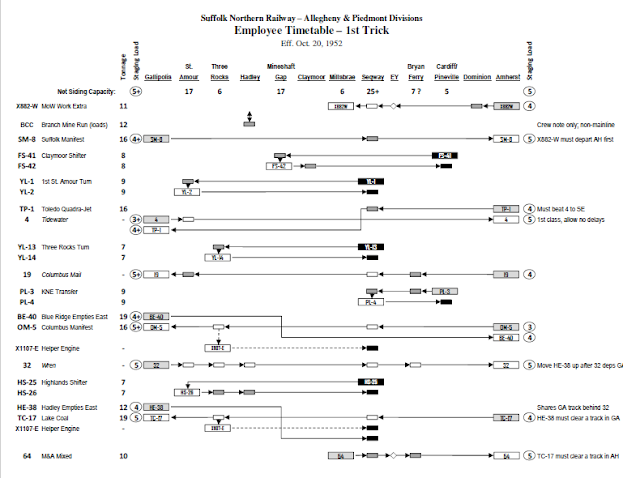 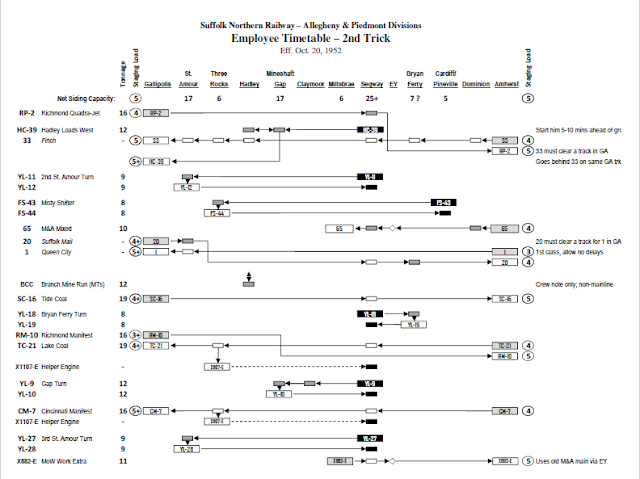 If you want to follow along, here's a legend for the map:

Each job on the schedule has an order, which is a modified Form 19 that describes the call point, destination, work to be done, etc..  These  are numbered to follow the starting sequence of the schedule diagram.  So as long as operators pull the next order off the stack, things move along pretty smoothly.  It's fine if guys want to trade off or take a break, as long as they don't start cherry-picking from down in the stack!

Orders do not provide clearance.  The crewman must still mark up with the dispatcher, and obtain verbal permission to occupy blocks on the mainline. 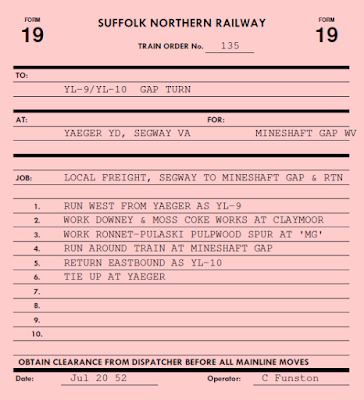 Since we reuse these orders in subsequent sessions, they also do not provide day-specific information such as lead engine number or departure/arrival track in staging.  Those are provided by the dispatcher when the crewman marks up.

WHAT'S IN A NAME

Let's talk for a minute about the naming convention for designating trains.

First, every job has both a symbol or train number, and, a name.  For passenger trains, the name is official, and as such, given in italics.  For freight and mail jobs, however, it's shorthand.  It may seem informal, but in real life, railroad men had a name for everything.  Every track, location, switch, and job had a name that was originally slang or shorthand, but that often evolved into an official designation.

For example.  Randy Seiler's B&O/PC Cincinnati West layout has two spur tracks at the Seagram's distillery in Lawrenceburg, Ind. whose names are reversed.  The "Five Story" track actually serves the ten-story building, and the "Ten-Story" track serves the five-story building.  But he models it that way because that's the way it actually is on the prototype - and always has been!  It's open to speculation as to whether the mis-designation could have had anything to do with the product, and its consumption while on duty.

Anyway.  Having both symbol and name present is a real boon to clarity during ops, because one is specific and the other is descriptive, but both are "right".  Crewmen in the heat of battle can use either to refer to their jobs and still be understood, while the dispatcher, who's a veteran, officially uses the symbol.

Each railroad has a different method for concocting the symbols, but the SNR's nomenclature is that the first letter is the destination, the second letter is the classification, and the two digits are part of some railway-wide sequence which we in the modeled portion will never see all of nor understand.  In reality, I use the digits as yet another way to help avoid confusion in referring to the jobs, by trying to avoid re-using any number on another job, including passenger train numbers, where possible.  Bob Bartizek first made this leap on his Pennsylvania & Western layout, and man was I impressed.  The P&W is a big and busy layout, and when I first started operating there, I lived in eternal fear of getting the letter designation of my train wrong and fouling up the works.  After the change, I knew that even if I called in as OMG-44, I might look like an idiot to the DS, but at least it would be unambiguous as to who I actually was, because there was now only one train tagged as 44 on the layout.  Luckily this change was in place before I began dispatching there!

The destination codes in use on the SNR layout are:

The train classification codes are:

Mail and mixed trains carry passenger train numbers.  And of course, in all cases, west is odd, east is even.