WHY SLOWER IS BETTER

My ex-brother-in-law is from the town of Carmi, in southern Illinois.  Now Carmi is not exactly so small that it says "Welcome to Carmi" on both sides of the same sign - it is the county seat of White County, after all.  But still for a city kid, it's pretty daggone rural.

When my sister and he first got together, I remember being amazed at how a) everyone in town knew him and said Hi, and b) he drove everywhere at 22mph, as did just about everybody. He refused to drive when they came to Cincinnati to visit, lest he get mown down in all the self-important urban madness.

But anyway, it finally occurred to me why you could spend years building a 450hp '71 El Camino, and then drive it 22mph everywhere:

➽ because it makes the town seem bigger.

Drive too fast, and you get where you're going too quickly - and you don't get to drive anymore.

Therein lies today's lesson:  most model railroads, like small hometowns, don't have enough main drag to go rushing through.  So let's take our time - and the world will seem a lot bigger.

When I first completed the SNR's mainline, I remember running a priority freight at what I thought was a priority speed - say, about 60mph - and I basically time-warped.  It felt like I ended up touching the staging loops at both ends at the same time.

At 150' of visible mainline, the SNR is not tiny, but it ain't exactly big, either.  At 60mph you can tick off that 2½ miles of mainline in... 2½ minutes.  Years of dreaming, years of waiting, years of building, and here goes junior engineer Mario Andretti burning from one end to the other in 2½ minutes.

So I reduced my target speeds - and the layout felt much bigger for a while. But eventually it seemed like the trains were screaming by again, and so I'd set a new target.  After several successively more conservative iterations in this manner, I ended up in the Goldilocks Zone - juuuuust right.  More on that in a minute.

We're used to thinking of speeds in miles per hour.  But what does it take to measure MPH?  Well, it takes miles, and hours - two things we don't have enough of on a model layout.  Even if we convert it to feet per second, we still have the problem of having to have a measured length of track, a stopwatch, and a calculator to determine our speed.

To keep ourselves in the target zone, what's needed is a way to measure our speed at any point on the layout, like a speedometer would.  For this, rather than feet per second, I like to use  seconds per car, when moving past a fixed point.  Reason being, the train is always with you - whereas a measured length of track is not.

So, too fast and you warp space-time and make the layout seem small.  Not to mention making the equipment seem toy-like, increasing the likelihood of derailments, and risking disaster.

But, too slow, and the rest of the crew spends most of the op session waiting in the hole for you.  And priority trains don't get the respect they deserve - a Limited of fluted stainless passenger cars seems downright depressing at 10mph.

Your own "juuuuust right" may vary, but over time mine evolved to this rule of thumb:  2 seconds per car.  That also will vary the target speed of the train based on the average car length.  Coal drags (34') will run slower than merchandise (40'), mail will be faster (50'), and so on.

After doing the math for what MPH my rule of thumb works out to - and then forgetting it - like, hundreds of times - I thought I'd put together a grid for easy reference.  Note that the calculations include the average coupling distance between cars, so that measuring is just as easy as counting off the time from the corner of one car to the corner of the next. 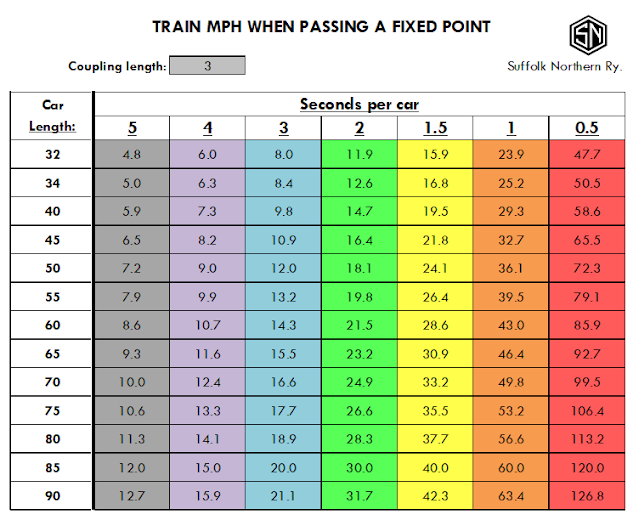 The target zone is green, as in, all clear.  Faster speeds get hotter colors toward red; slower speeds get cooler colors, toward gray.  The neat thing is, once you have your rule of thumb in mind, you no longer need a stopwatch, a ruler, or even math to keep your speed on target.  Hey, you really don't even need this grid - all you need is an eyeball, and one-Mississippi, two-Mississippi.

THE SPEED OF SOUND

Now, all that said - do I enforce a speed limit on the SNR?  Oh, hell no - that wouldn't be any fun.  There are a couple of operators out there who risk lighting the Christmas tree on fire with the speed of their toy trainset - but, everyone's there to enjoy himself.  If it's not impacting other crewmen, I don't even mention it unless someone asks.

And besides, I have a more subversive way to influence train speed:  I tune the road engines' speed tables so that "too fast" is uncomfortable to listen to.  Steam does that naturally, assuming the sound is properly synched with the drivers.  Most guys, if running an engine that sounds like an AR-15, will tend to dial it back a few notches until you can hear individual shots.  So a decent speed comes pretty well naturally (unless your road engines have 80" drivers, which the SNR eschews as "flatlander silliness").

Diesels take a little more work, however.  I have flattened the speed tables such that the Goldilocks Zone is achieved at Run-5, which in EMD 567s is just after transition.  If you edge it up to Run-6, you're usually right at the edge of "good" speed, and that switch between 5 and 6 is useful for adding more prime mover howl as you dig into a grade, but without really accelerating.  I've also dialed back the number of speed steps per prime mover notch to 4, which I think makes for more responsive sound.

It's uncanny - if you haven't heard her "shift gears" (transition), it just seems like you're idling, and you're antsy to get moving.  Whereas, at the upper notches, it sounds uncomfortably like screaming - like when you're at 6,000 revs trying to pass someone on a 2-lane highway, and you're reasonably certain you're about to see a piston come flying through the hood.  Passenger units (Es) and non-EMD engines don't have the transition, but the effect is similar.

Guys' response to the target speeds and sounds has been delightfully predictable and natural.  It's not perfect, but who needs perfection - on average the crew runs at responsible speeds that still keep the schedule moving, and I'm pretty sure everyone's enjoying himself.  That's the primary goal.