My friend Bob Bartizek (Pennsylvania & Western), like many of us, ended up with slight grades on some sidings, usually just from mild undulations in track or benchwork.  While almost imperceptible in the trackwork, today's needlepoint axles and metal wheels would mercilessly root out the imperfections, and cause spotted cars to un-spot themselves at will, and sneak along to unapproved locations on the spur.  And in some cases, they'd merrily roll all the way out into the traffic fray.

Some of us use retractable "tie-downs" or "track brakes", but these take a lot more work to install than is merited by a spur.  They are most appropriate on thoroughfare track with substantial grades.  Some in the group use "whiskers" of stiff nylon line that will hold a car by the axle, yet are nearly invisible and can be powered through.  This is deft, and a huge help in Denver's 36th St. yard on Jim Rollwage's Denver Pacific (UP), which can hold at least 14,000 cars.  A minor quibble with this method is that a whisker stiff enough to stop a heavy car, or especially a whole cut, can derail a light car.  Although, this is not a problem on Jim's layout, as the fleet is pretty consistently weighted, the grade is slight, and the whiskers are not called upon to hold long cuts.

Bob's solution on his O scale PRR layout was to use a bead of super-glue on the railhead.  This forms a bump that will hold a car, but like an asphalt speed bump, can be conquered with horsepower.  I am going to say this even though it should be obvious to almost any sentient human, because it was not to me the first time I heard about it:  it is a bump of dry super-glue.  One is not actually gluing one's rolling stock in place.  (It was a relief to me, and a vast simplification, to hear that clarified.)

Some advantages of this technique over the whisker is that the bump can be shaved, such that it is just high enough to do its job but does not disrupt traffic nor derail cars.  It can also be shaped so that it is directional - a chock on one side, and a gentle ramp on the other.  And it can be rounded such that it's not violent to roll over.  Finally, since it is made with fluid, more can be added to rectify over-zealous shaving.
The greater group found this solution ingenious, and so at some point christened Bob's technique "Bartizek Brakes".  Bob will stipulate that this wasn't his original idea, but since he's the one who brought it to the group's attention, he gets the credit in this circle. 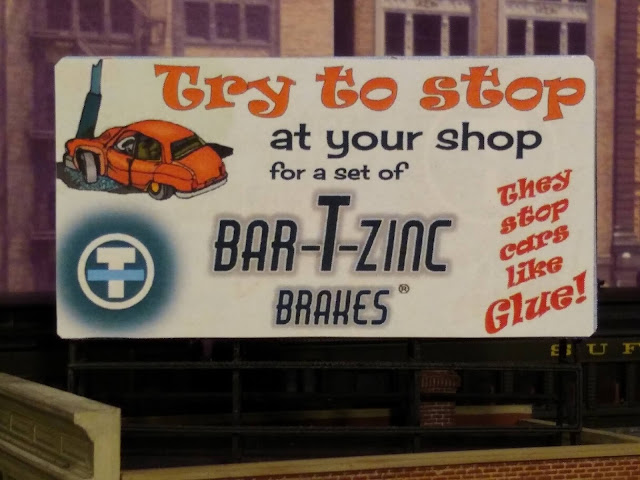 I've had good success applying in several locations on the SNR.  In construction I went to great lengths to set dead-level spurs, including shaving homasote, shimming cork, and even slicing the ply-o-sote sandwich so separate risers could be used.  However, I stepped on my own shoelaces when I then installed three different heights of roadbed - high iron, secondary, and spur - each about 3/32" lower than the previous.  Further the secondaries and spurs are all code 70, versus 83 on the main, and there is even some code 55 in places.  So, in a me-like fashion, I created harsh ramps down to the meticulously-crafted ramp-less plains.  Blogs don't seem the place for emojis, but I'll make an exception here:  😑
No matter - Bartizek Brakes have worked out great at mitigating the problem.  As time has gone on I've been "tuning" them to be as unobtrusive as possible - only sharp enough to hold a car that is gently rested against it.  I also chose a bright green weed to identify their locations - primarily because the bright green was the only weed color in the package that I had not used yet.
Below are some of the Bartizek Brake installations on the SNR. 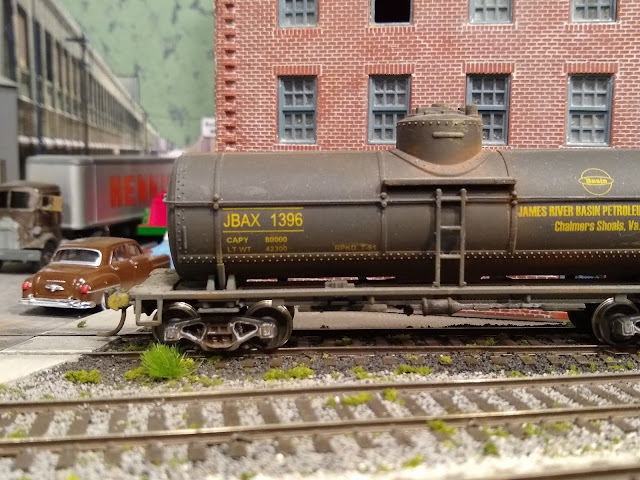 A BB on the lead to the Basin refinery as it descends down off the runner toward Western Ave., holds this off-spot inbound tanker in suspended animation on the ramp. 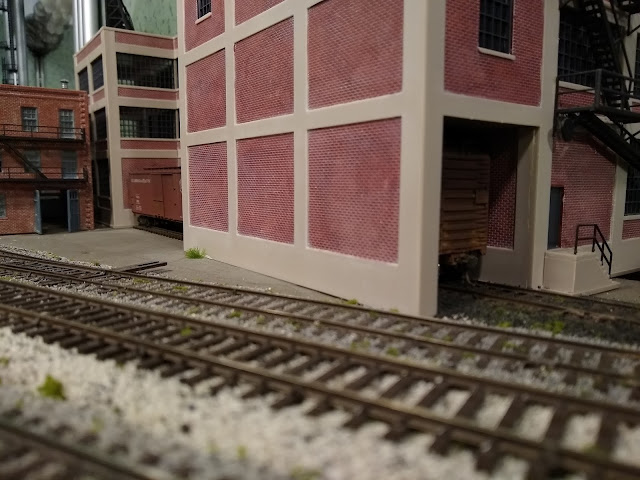 The bright green weed (vivid upon the barren homasote plain) marks the spot of a brake inside the building, at Kees-Austin Publishing Co. in West St. Amour, holding a car on the descending track at the covered dock.  The open dock beyond is on all-level track. 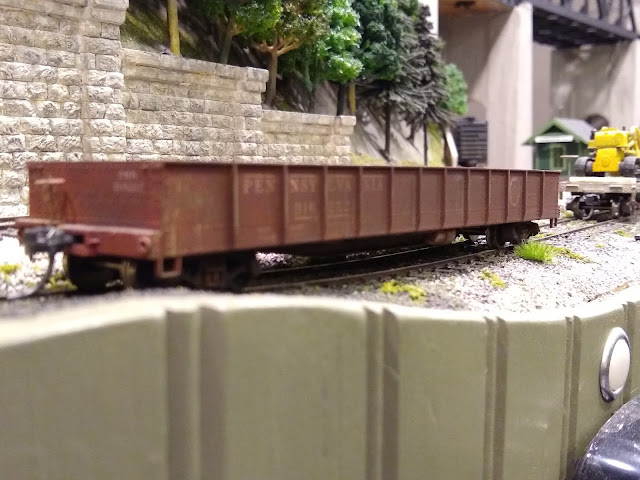 At the company materials yard in Dominion, Va., the spur drops a scale 6' off the high iron down to the loader at the gravel pit.  A brake at the bright green weed holds a gondola heavy with rail from Pittsburgh on the grade at the MoW area, whereas the track beyond into the ballast area is level. 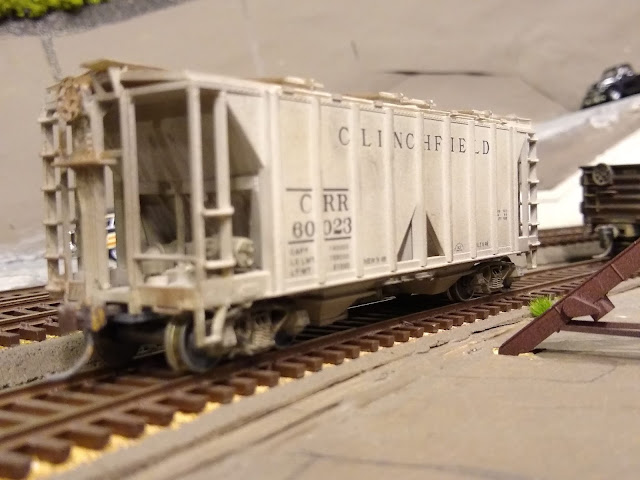 The switch into the Aidan Metal foundry is on the main, so the Bryan Ferry industrial track has a long way to fall.  The brake here holds a covered hopper full of casting sand against gravity at the (future) bulk unloader.  The gon beyond is on level track in the loading yard. 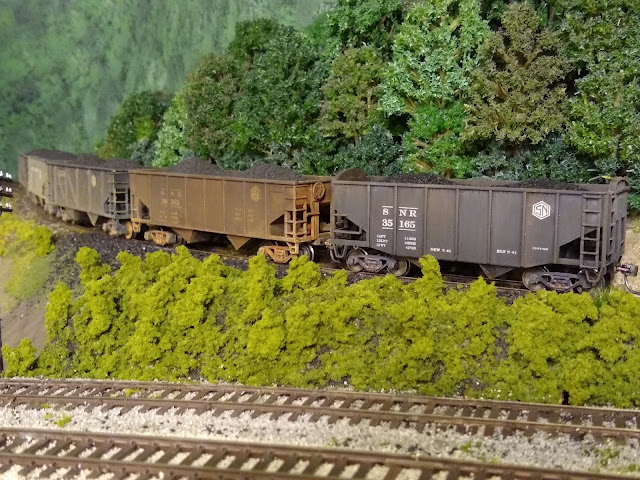 Lurking amid the lush overgrowth on the property of the Barrett County Coal Co. is one brighter weed, denoting a BB that is holding a cut of loads on the branch main itself, above the yard (which is full).  The SNR job HC-39 will be by in the afternoon, to pull the loads and spot empties in their places.  The brake allows the BCC crew in their Heisler to escape the yard and get in behind the overflow cut, so they can shove the empties up the branch to the tipple at Big Slide.