Transformers: More Than Meets The Eye 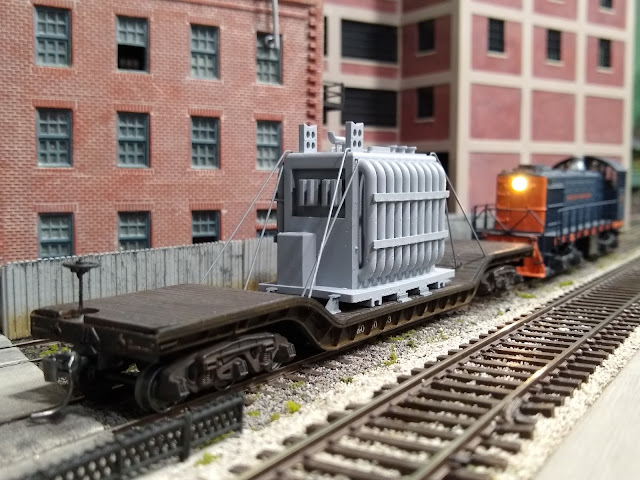 The St. Amour yard goat, S-2 #137, rolls along the Western Ave. line
with an important shipment for the Manufacturer's Generating Co..

I've long had a hankering for a depressed-center flat car, but needed to find a reason to have one on the layout.  A few years ago, I built an equipment dock for the small power plant in St. Amour, in part as a destination for such big electrical loads, someday.  It's a wee bit wee for this purpose, but hey, it's the Suffolk Northern - what isn't? 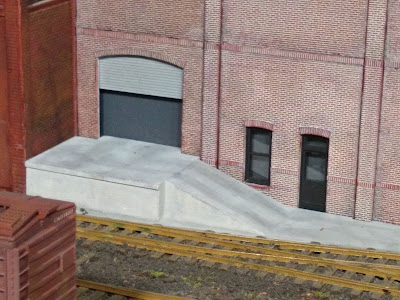 Roll Out the Zoloft

A while back, I got a depressed-center flat car as a gift from my friend Jim Bax, who is the honoree of the JBAX reporting marks for the James River Basin Petroleum Corp. refinery.  It's a Roco model, and has been sitting on the shelf ever since, new-in-box, waiting for its coming out party.  I liked that it's a 6-axle car, whereas most of the models you see are of the four-truck variety, which would be overkill in the tight confines of the SNR physical plant.

But the Roco needed some work for its debut.  For starters it had truck-mounted couplers, and weighed nearly as much as a postage stamp.  After some draft gear fabrication I was able to jam a couple hundred pounds of lead skeet shot into every nook and cranny, including the hollow between the deck and frame, and get it to at least stay on the rails when breathed upon.

However, as a low-boy it was riding on 26" wheelsets...  and while they looked to be of great quality, having both metal wheels and metal axles, every last one of them was out of gauge.  It was bad enough to derail the car on virtually every turnout, and no testing with additional weight would remedy it.  Further, the wheels were fused to the axles so tightly that they were impossible to budge without collateral destruction of the wheelset.

So having a poorly tracking car, with oddball wheelsets, some of which were now destroyed, I was in a bit of a bind.  I tried standard 33" InterMountains, but that left it riding way too high, and created clearance problems with the trucks too.  Luckily I was able to locate a set of Kadee 28" wheels - close enough for who it's for.  I still had to ream out the journals to get the Kadees to actually spin, of course, but ultimately did get the thing to track fairly reliably.

Woof.  At least all that was left to do was a better brake wheel & staff, and weathering, especially to mute the dazzling, chocolate-brown plastic deck. 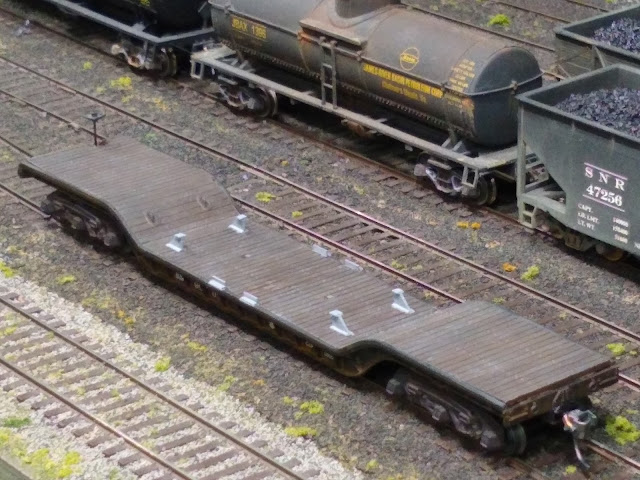 Depressed-center flat car: check.  Next up: a load.

The goal here was to find a transformer load big enough to justify a well-flat, but small enough to not also require a high-wide movement.  That's actually a pretty narrow range, and no amount of searching would reveal one that'd fit the bill while also being an appealing model.

Walthers makes a nice kit, which I'd planned on using, but it turned out to be gargantuan.  Gave that one away.  Beaucoup 3DP and resin options are out there, but they all failed one of the dimensions, the era, and/or the aesthetic tests.

Enter, as always, my friend and tech man Darren Williamson (IHB).  He looked around for drawings usable for 3D printing, but found equally few candidates fitting our specs.  Finally he just engineered the damn thing himself, using numerous references from photos and plans, and printed it for me.  With a couple of iterations and a coat of Westinghouse-y paint, this is the result.

I couldn't be happier.  (Thanks, D!)  I think one of the best features is those cooling tubes on the sides.  Modern units use cored radiators like automobiles, and, those are usually shipped dismounted from the transformer - so that the actual load is kind of just a box.  But in the old days, the oil was cooled just using circulating pipes, which were integral to the unit and therefore shipped as a complete assembly, adding gobs of character.

Darren also added a variety of representative control boxes, insulator mounts, stabilizers, and other details - and those funky top brackets that are mounts for the oil reservoir.  His original design included the tank too, but especially perched way up on top, that would have been shipped separately.  Probably the brackets too, but no way I was parting with those!

Enter my friend Ed Swain, whose beautiful PRR Middle Division is replete with open-car loads.  And every one of them is prototypically mounted, with chocks and blocks and straps and chains and rigs of every size.  So much so, in fact, that he qualified for the billboard rotation on the SNR. 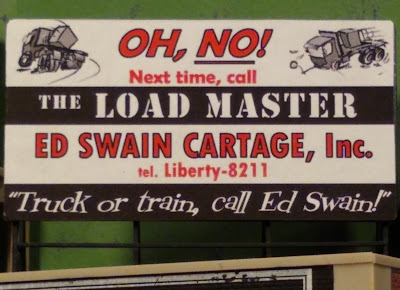 A while back Ed had turned me on to his secret muse, the book of AAR Flat Car Loading Practices, part of the Railway Prototype Cyclopedia.  This is another rabbit-hole volume of addictive period minutiae, on par with the Postwar Freight Car Fleet book I mentioned in an earlier post.

Well, the flat car "bible" shows that transformers in the 25-250 ton range should be tied down using no fewer than eight 1" steel rods, secured in some way directly to the car's frame.  And the unit is to be girded at its base by brackets bolted through the deck, or on steel-floor cars, actually welded to the floor.  Who knew.  These guys were serious. 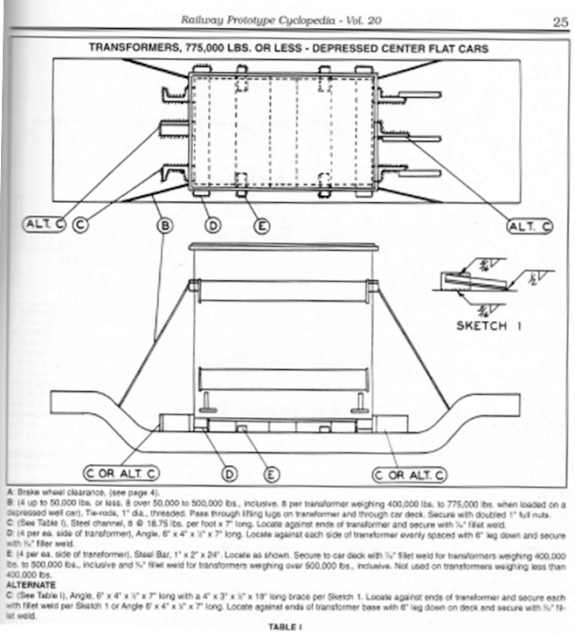 The AAR rules offer numerous options for the format of those brackets, so I cobbled up some representative articles from Evergreen I-beams and channel, and mounted them to the car.
This of course means if I ever want to run a different load, it will need to have the same footprint as this one.  But that's no problem - and with any luck it will provide a convenient excuse to build up another car. 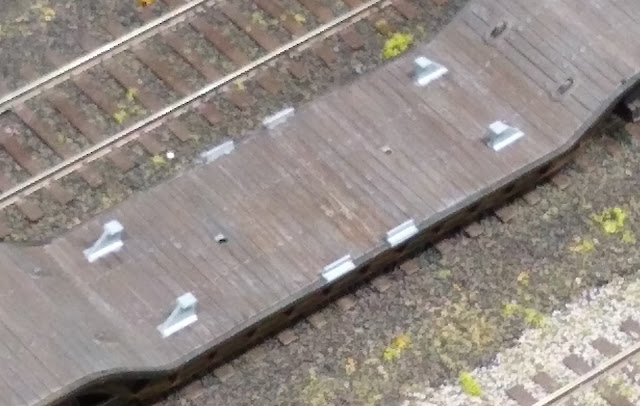 For the stays I used .015 brass rod.  These are to be mounted to the transformer's loading hooks, or - to the mounts for the loading hooks, if the hooks themselves are removable, which is the route I went.
The car features mounts in the depression slope that are secured to the frame through the floor, for just such a purpose - so I put four of the stays into those.  The other four stays went through holes drilled in the upper frame rail, since the car does not have stake pockets. This practice was specified by the AAR too. 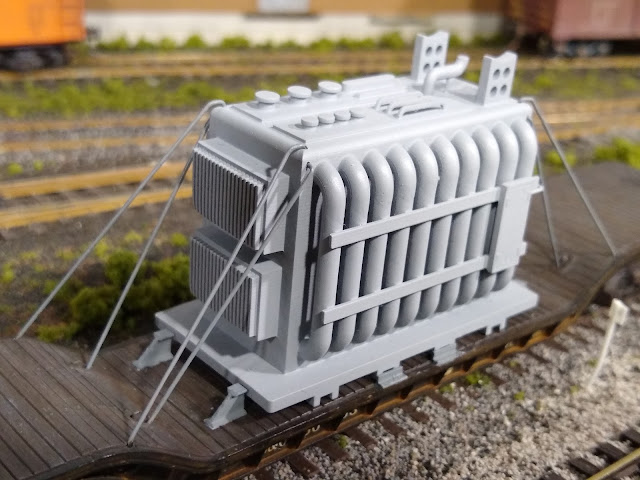 Because I'm a loads-in-empties-out kind of guy, the transformer had to be removable - so seating it and getting all 8 of those stays into their respective holes at one time is a little like putting high-heels on a cat.  The price we pay.
Loaded:  check.  Thus concludes yet another post with far more verbiage than I intended.  But the project was a trip and had some fun stories to tell and people to thank.  Thanks to you for reading, and let fly with the comments below! 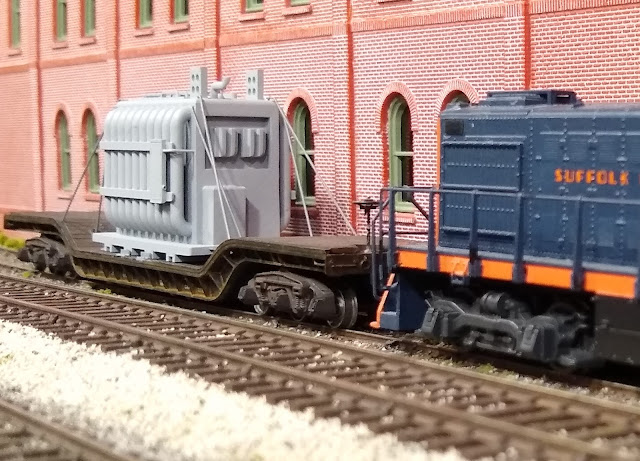 Number 137 gently accelerates the massive transformer away from the Della St. interchange.

Posted by Keith VandeStadt at 12:49 PM