Paul Miklos - Stopping By Woods On A Snowy Layout

Paul models the B&O Chillicothe Sub, from Chillicothe, O. to Cincinnati, in the winter of 1958. The 4-deck N-scale layout has a mainline run over 17 miles long, which is nearly a full third of the actual length of the division (55 miles).   That incredible amount of mainline means you get a real chance to experience how Timetable & Train Order operation was actually done, and it's a blast to operate - especially using the actual B&O timetable for the division from '58.  See paragraph at end for anecdotal evidence.

Of course that much real estate also means the man has got a lot of trees to create.  And, the job is made that much more interesting by the fact that Paul is modeling winter, so there'll be no proliferation of puffballs for the Ohio woodlands in this case.  No sir.

Paul claims that viewing my early attempts at forestation with imported, pre-made trees actually gave him the inspiration to get moving on his own terraforming.  That's flattering, especially because his creation is head and shoulders above my furnishing.  Paul spent his career as an architect, and is a watercolor artist on the side, and is evident.  (Let the record show that I wanted to study Architecture, as well, but was waylaid by Accounting, since it came first in the course catalog.)

Anyway.  Paul had no lazy way out for his woodlands - ain't nobody making old-growth barren hardwoods in N scale, at any price!  Paul experimented with a number of methods, but settled on using broom bristles, bound together into trunks, then dry-brushed.  Not exactly quick-n-dirty.  Have a look below and I think you'll agree, the effect is breathtaking.

Also you may be amazed to note the height in comparison to the trains.  I have old-growth woods on my property, and I can vouch for the fact that trees in this area do run 80' or more in the middle of a stand - having measured a few as they've come down.  We lost a 120+ year old sycamore in 2002 that was pushing 100' on the ground.  And Paul has captured that majesty brilliantly. 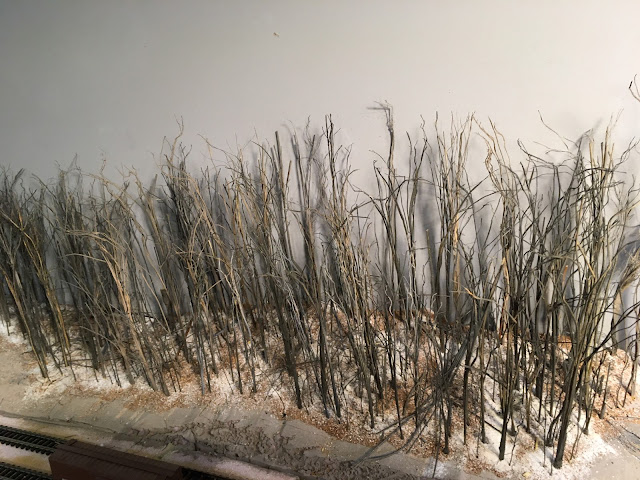 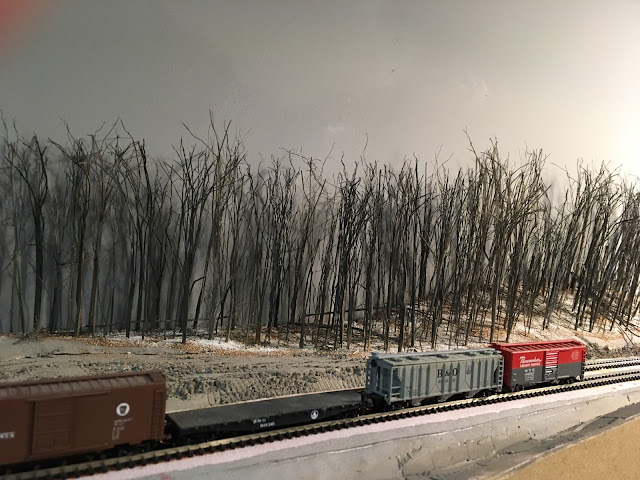 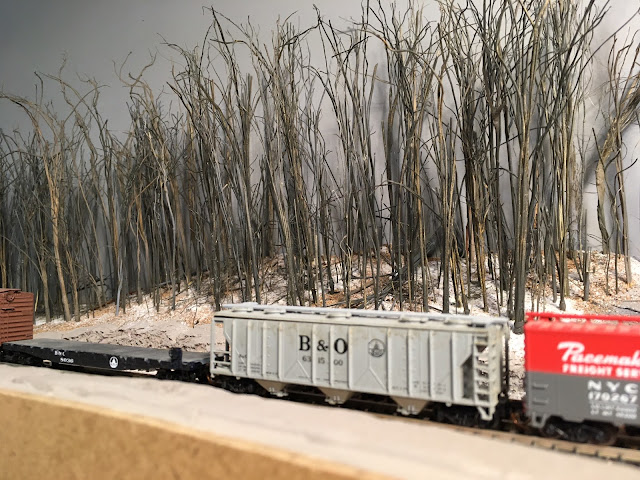 Maybe it's just that I've lived in Ohio for more than half a century - including moving back - twice - but to me that just looks perfect.

I have the good fortune to be a regular crewmember on the "Great B&O" as Paul calls it, which he operates monthly for most of the year.  I once ran a local freight out of Brighton Yard in Cincinnati, on the bottom deck, that was a turn to Greenfield, on the top deck - that took over two months to complete.

With all locals being extras, the congestion on the subdivision at that particular time meant that I marked up near the end of one session, spent next month's session working to the turn point and getting the train turned, and it was not until the following month's session that I re-crewed it again, and made it all the way back to the yard.  Meantime I railfanned, ate cashews, watched the timetable, picked up orders, begged at the towers, calculated run times to sidings, and ducked out of the way of a parade of scheduled trains.  There just aren't a lot of layouts with enough real estate to host that kind of a simulation. And of course in dog years, three monthly operating sessions add up to one calendar day (I believe it was January 4, 1958).  So, just another day at the office, Hon..