Roll in My Sweet Baby's Arms...

"I'll lay around this shack
'Til the mail train comes back,
And I'll be rollin' in my sweet baby's arms."

I've been fascinated by mail trains for a long time, with their typically mixed bag of equipment and color schemes, and being so iconic for the classic era.  The variety of colors came from being decorated in their roads' multiple passenger schemes, for use as head-end cars on name trains.  As passenger consists and standard liveries changed, cars with those snazzier paint jobs began to drift down into the nameless mail runs.

One of the more interesting species in the mail phylum was the converted WW2-era troop sleeper.  These were basically 50' boxcars outfitted for military passenger service, built in quantity and on the cheap during the war.  But after de-mobilization they were surplussed - available for little above scrap value, despite having seen only a couple of years of use.  Riding on high-speed trucks and carrying passenger accoutrements including steam and electric lines, end doors, and diaphragms, they were ideally suited for conversion to bargain express equipment that could run with the fast-mails. 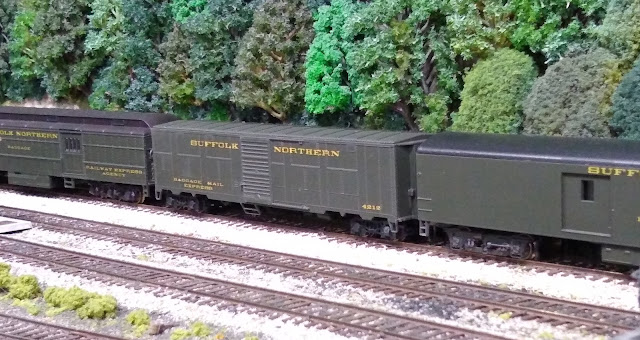 Walthers made a good model of these cars 15-ish years ago.  I grabbed several and painted them Pullman Green, such as #4212 above, since PG was the standard (only) SNR passenger scheme going at the time.  Just like life.  But once the fancier passenger schemes took shape on the SNR, I applied them to some of the mail equipment as well - also just like life - and in so doing, I developed a deep need to doll up a couple more of these troop sleeper conversions too.  It just took a while to finally make the time.

Here's a look at each of the two, along with a brief history of the livery. 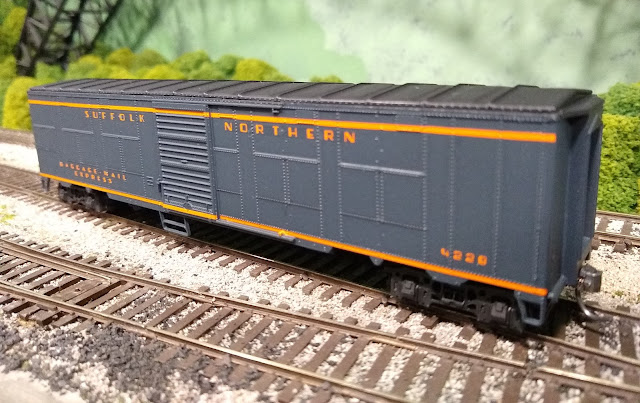 Number 4228 was one of several cars painted into the Tidewater scheme when the block was first acquired, in 1946.
They were originally intended for head-end service on the Tidewater and other name trains.
This livery dates to the SNR's first major order for lightweight streamlined cars.  In the mid-1930's - the age of Zoot and Art Deco - the Depression was beginning to ebb and it was time to re-equip the Cincinnati-to-Suffolk flagship train, which was still all heavyweights.  The new Tidewater's blue-with-orange-stripes scheme and art moderne font established the road's lasting color identity - long before the first diesels were on the property. 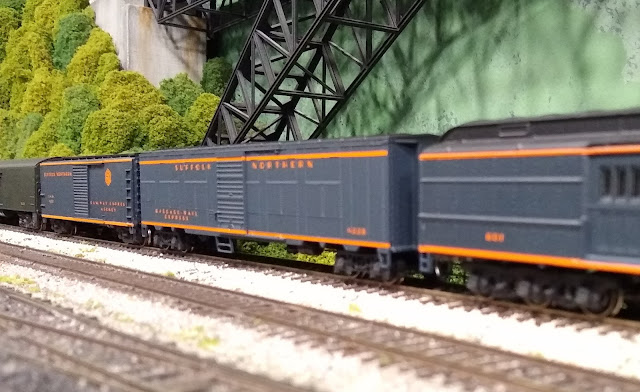 Flanked by other mail equipment in the Tidewater scheme,
car 4228 heads west on mail-express #19 at Segway, Va. 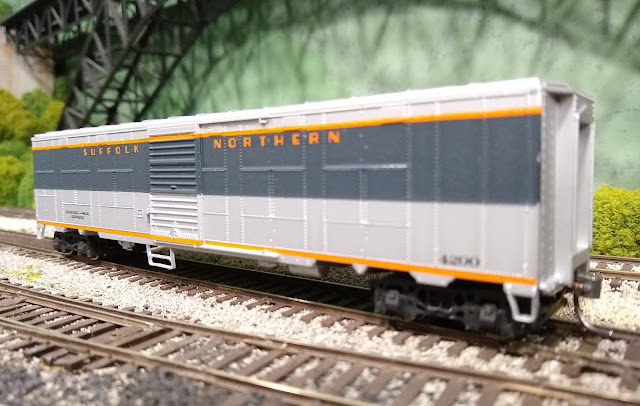 The class leader #4200 was repainted from the green in 1951,
for use on the Toledo train that connected with the Queen City at Jackson, O.
As with the C&O's Chessie, the SNR attempted to liven things up in the late 40's and spark a resurgence in passenger traffic with the introduction of an entirely new day train, the Queen City.  Cars for the all-coach Queen City comprised the railway's first order for stainless steel equipment, and so ushered in a new variant of the passenger scheme as well.
This livery became the new standard for passenger car repaints, with Imitation Aluminum paint replacing actual stainless steel on conventional equipment, including mail cars.  As with "the Tidewater scheme", this became known as "the Queen City scheme" for the train that introduced it - or simply, "the Budd scheme".
EMD's Art & Color Section actually developed the design in 1940 for the E6s, SNR's first order for passenger diesels.  That design incorporated the steam-era Tidewater's blue-with-orange-stripes uniform, but anticipated future orders for stainless equipment by adding silver lower side panels (not to mention a big silver bow wave on the shovel-nose diesels).  WW2 restrictions, however, meant years would pass before the first stainless cars could be delivered by Budd to match. 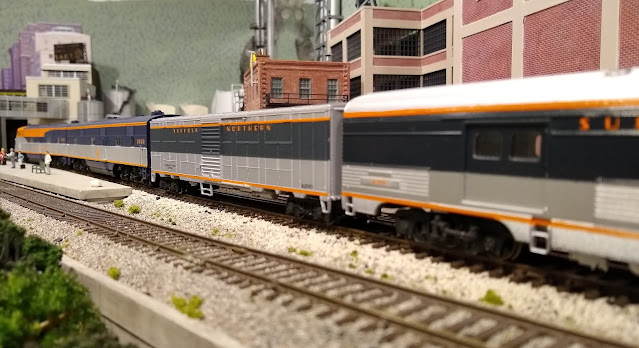 Car 4200 rolls into the St. Amour Rail Terminal on mail-express #20 -
trailing a pair of the E6s which had foreshadowed its paint scheme,
and ahead of a Budd baggage-mail car whose paint-on-stainless layout it mimics.
I'm very pleased to be displacing a bit of the Pullman Green, and injecting a little more color and variety into the mail runs.  Thanks for reading!
Posted by Keith VandeStadt at 10:08 AM