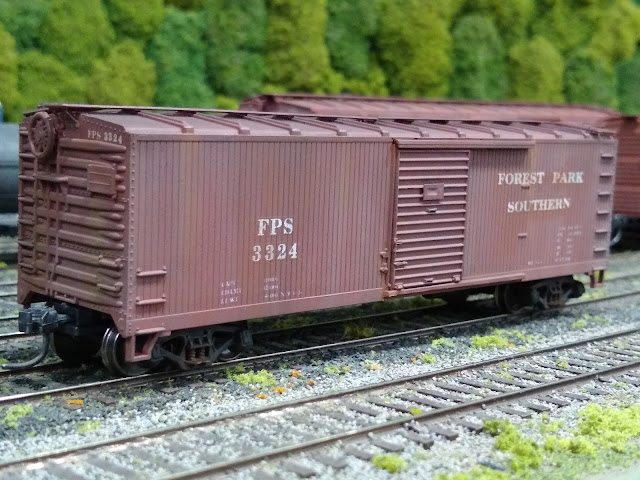 I was driving through Segway, Va. the other day, and took a swing past Yaeger Yard on the SNR as I often try to do - and found this interesting item had shown up.

It's one of Forest Park Southern's venerable fleet of double-sheathed cars from the early 20's, yes, but this one looks like it has been to the spa.  It's been rebuilt recently, and kept its wooden sides, but that's about it - the FPS shops have treated it to new Dreadnaught ends, power hand brake, Youngstown doors, and a lacey new steel roofwalk, along with a fresh coat of paint.

Judging by the weathering, I'm guessing the overhaul was done around '46 or '47, as were a lot of the wooden car rebuilds, once a little steel was available again.

It's good to see this car was still solid enough to get a new lease on life.  A lot of those old 8' ceiling jobs just got beat to death during the war, and are getting scrapped outright. 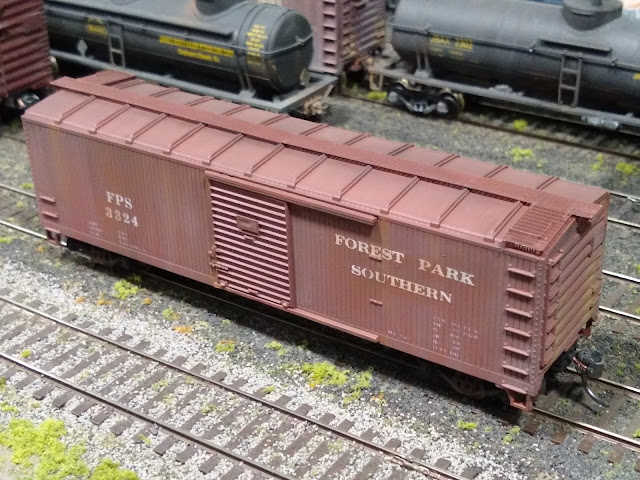 Several months ago, good ol' Bill Doll (Forest Park Southern) gave me a Train-Miniature double-sheathed car with Dreadnaught ends and wood doors, lettered for FPS.  Since it was still in kit form, I asked him if he'd mind if I updated it a little bit.

Most of the pre-war wood cars I've seen from the early 50s that were lucky enough to receive Dreadnaught ends during a rebuild, usually also had their wooden doors and running boards replaced.  Those would have been easy to do, and it's likely that the doors would have been just as beat as the original wooden or Murphy ends.  And the steel running boards would have been a general safety improvement, even if the wooden ones were still in decent shape.

So this car received a pair of Tichy 6' Youngstown doors, which are 8½' tall but easily trimmed down to 8'.  I sliced down the enormous TM lower door guides as part of the door replacement.  The gossamer-thin open-grate roofwalk is from Kadee - which juuuuuust about fit.  Those TM cars are diminutive in every dimension, but by taking a small graft out of the center of the Kadee part, I was able to settle it in.

Fortunately the car was in standard Box Car Red, so I could touch up just the doors and roofwalk, and blend everything together with pastels.

I love having cars from friends' railroads running around the SNR, and I love variations on a standard to keep things interesting.  Bill's present gave me both - thanks, Bill!

Posted by Keith VandeStadt at 8:59 AM