Alleghany Scrap Inc. is a dealer and processor of "previously enjoyed" ferrous material in St. Amour, W. Va.  They receive inbound scrap in gondolas and via truck, cutting the larger items to sizes required by the mills, and stockpiling the outbound product to take best advantage of market prices.  They also receive and dismantle rolling scrap, such as retired or wrecked locomotives and cars.** 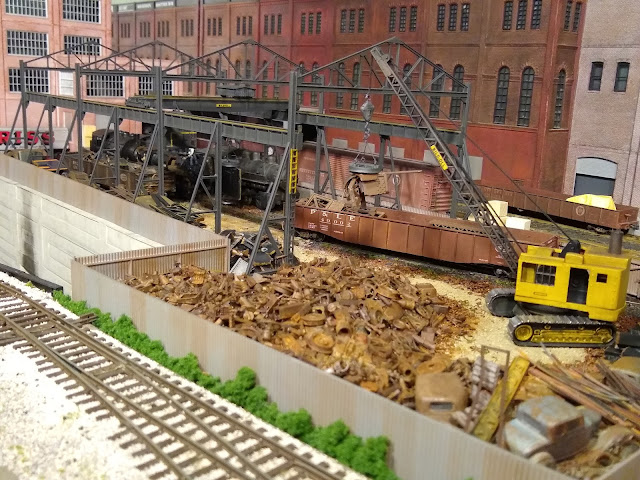 This is yet another project I have been ruminating over since the Reagan administration, that has always taken a back seat to more pressing matters, such as mainline ops and raising children.

For 28 years the scrapyard in St. Amour has been an unsightly sector of bare homasote, with some piles of refuse and a SceneMaster crane on it, guarded by one 9" segment of corrugated roofing implying a fence.  A few years ago I went so far as to dig out all the dead steam locomotives from DC days that I could find, and set them on some loose track, to suggest a source for all the scrap that the yard loads out.  And I've been accumulating parts and chunks for the scrap heaps all the while, just waiting for motivation.

But recently, after musing with my friend Darren Williamson (IHB) about how I've been wanting to have dead-in-tow engines show up in road trains and get delivered to the scrapyard, his enthusiasm for the idea finally lit a fuse.  Naturally the couple-of-weeks project has taken me 3 months, but I'm pleased to finally get Alleghany Scrap Inc. presentable.

The national steel strike in early '52 depressed scrap prices badly, and had Alleghany stockpiling material anywhere it would fit.  But with the strike now over, the firm is desperate to move tonnage before the heaps overwhelm the yard.

One of the limiting factors had been that I really wanted to have an overhead travelling crane running as much of the length of the yard as possible, but - I only had one of the Walthers kits on hand.  These kits have been so widely used, and out of stock for sooooo long, that there were virtually none of them for sale out in the ether.

Enter to the rescue my friend John Miller (Kanawha & Lake Erie), who has, in the enormous outbuilding that houses his layout, at least three of everything.  John scraped together almost an entire kit from random bits for me, and further was kind enough to refuse payment.  Thanks again John!

So I was able to aggregate about 1½ Walthers cranes, and, use some of the extra uprights to construct trusses for horizonal stabilizers.  This was done both to capture an interesting design element, and stabilize the model.  They also provide useful interference to uncoupling operations for the St. Amour switch crew. 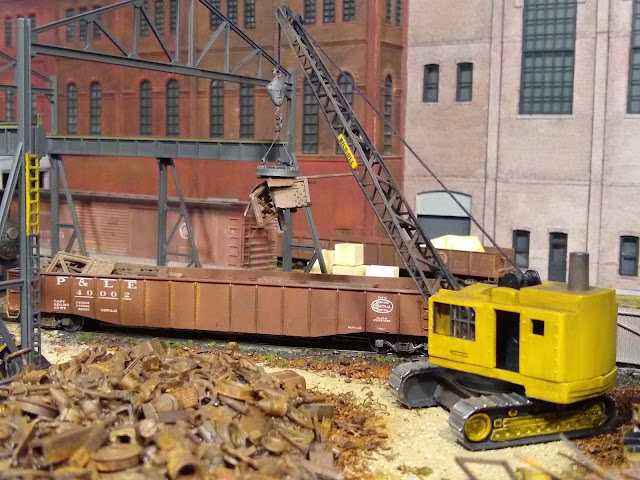 Alleghany's tracked crane works to load a gondola from the "outbound" pile.  The crane is a basic Walthers SceneMaster item - but a little paint, weathering, glass, and foil for the treads gave it some "pop".  The electromagnet is from the spare Walthers overhead crane kit. 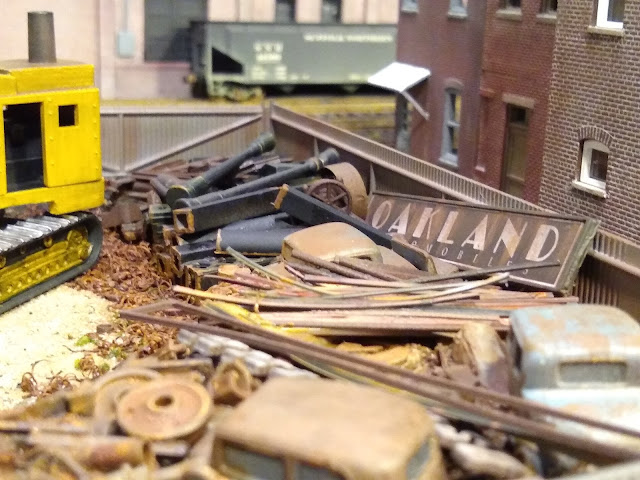 Derelict signs, gaslight lampposts, and channel cutoffs are just some of the items in the "inbound" pile, waiting to be cut into morsels suitable for the arc furnaces. 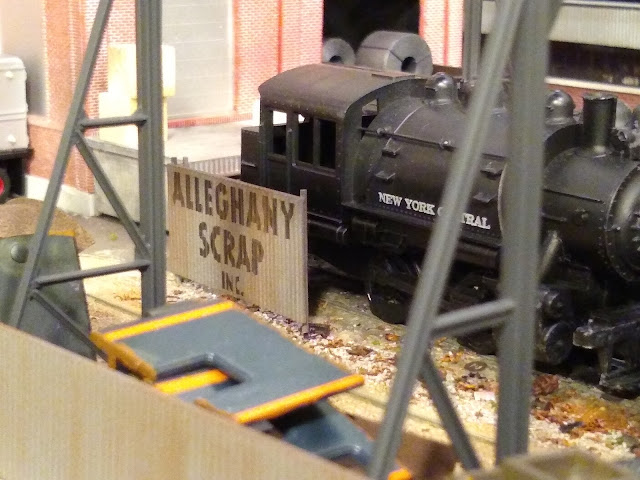 Scrap piled by the street gate, waiting to be reduced, includes sections of a wrecked Pullman, in SNR's Tidewater scheme. 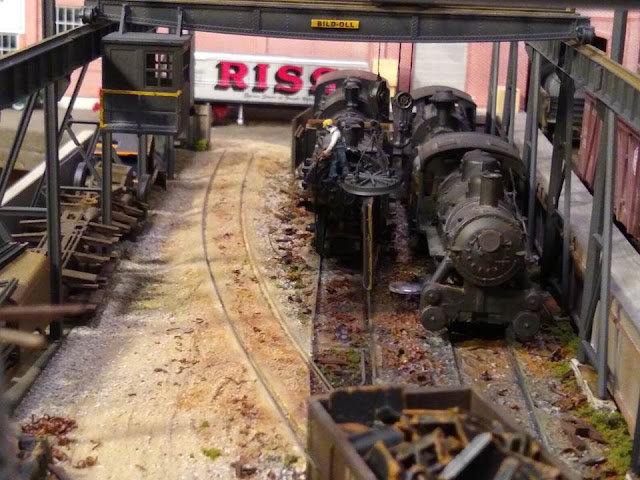 Most railroads began dieselization with switchers.  So diminutive locomotives have begun to arrive in quantity at the salvage yard, as the railroads have become comfortable that internal combustion can handle the demands. 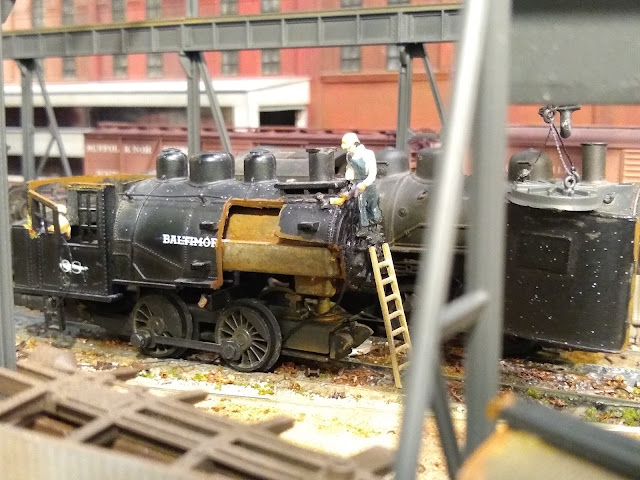 The cutting crew works on reducing a little saddle-tanker to tiny bits, as the travelling crane absconds with its cab roof.*** (There's probably an "I Just Died In Your Arms Tonight" joke in there somewhere with the Cutting Crew reference, but I'm letting it go.) 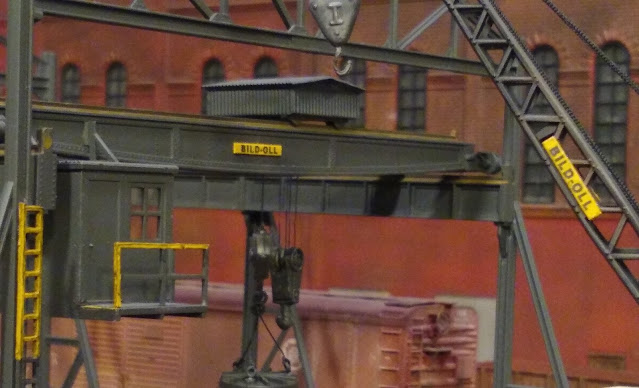 Both cranes were supplied by a reputable local dealer, down the road from St. Amour in Flowing Springs, W. Va..  Legend has it that when the wisecracking owner of BILD-OLL was confronted with the irony of his "Build-All" cranes being used in a scrapping operation, he quipped, "Sorry, 'Wrecks-All' was already taken." **** 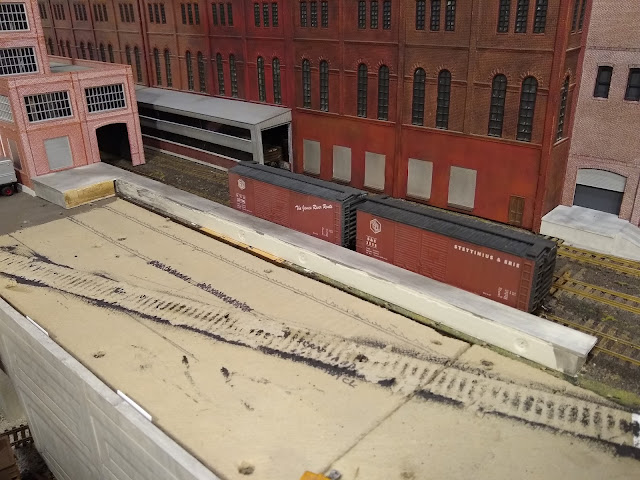 First order of business for the scrapyard upgrade, oddly enough, was a new "proper" loading dock for the Combustioneer plant, which runs behind the fence.  Of course you can only see about 3% of it from the aisle, but I know it's there. 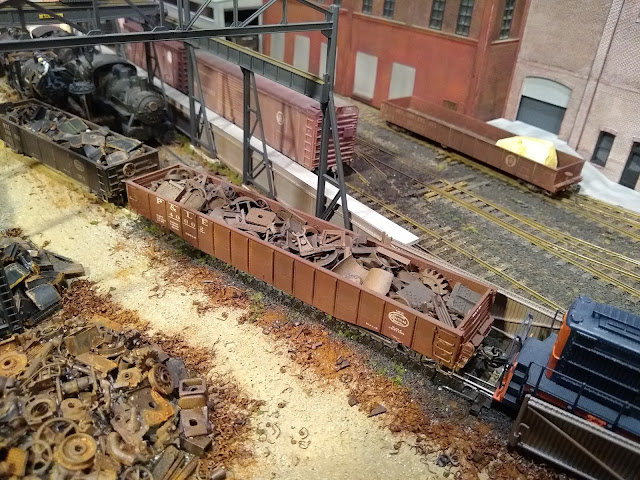 The St. Amour switcher ducks between the opposing gates to pull outbound loads - one bearing general small and cut scrap, and one from under the gantry comprising chunks of an old hopper.  No matter the source though, it's all headed for the furnace, to become beer cans, boat anchors, or Buicks. 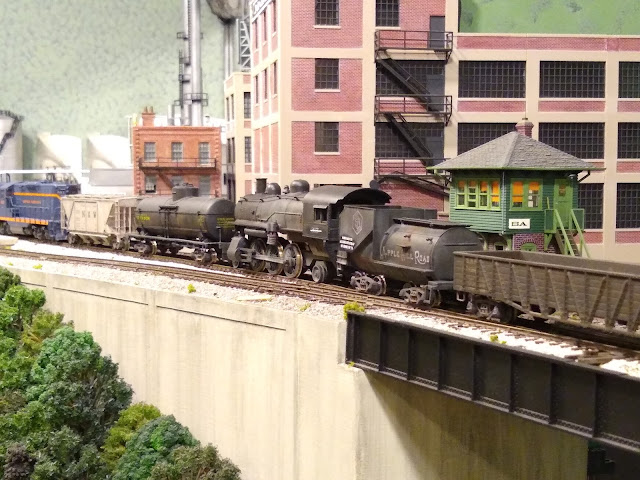 The SNR dieselization program has begun to trickle down to subsidiary roads now.  Manifest freight SM-8 arrives in town towing a venerable Prairie-type locomotive from predecessor Cincinnati, Jackson & Gallipolis, the "Apple Hill Road".   The engine was dispatched from the former CJ&G's main terminal in Jackson, Ohio, eastbound via Gallipolis. 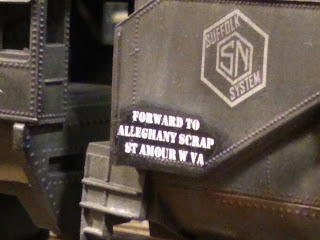 Railroads often stenciled or chalked the destination on out-of-service rolling stock.  This is also done to avoid confounding the Yaeger yardmaster, since such vessels would not be on the switchlist. 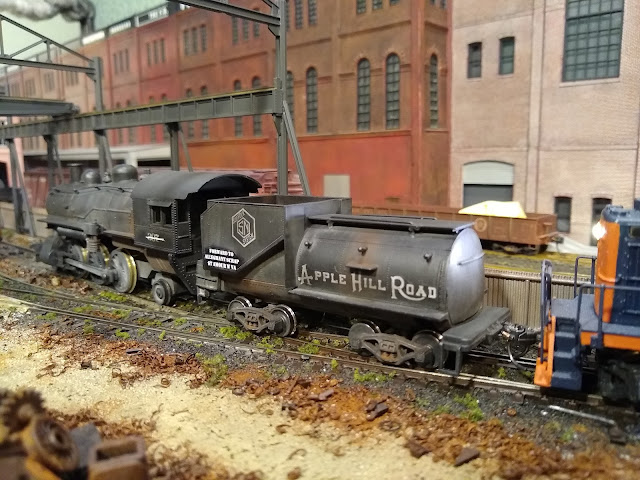 The tired old CJ&G locomotive's last ride comes to an end, as it's spotted on a "cut" track at Alleghany by the Della St. yard crew.

** As a teenager I read the book The Twilight of Steam Locomotives by Ron Ziel about 400 times.  It contained a chapter on the scrapping process, which chronicled the death of an enormous CB&Q 2-10-4.  This both sickened and fascinated me, and left me with a lifelong need to model the industry.  An NMRA Bulletin article from the 1970's introduced me to the fact that towing retired steam engines to scrap was a routine part of revenue freight movements, and I've been itching for some time to include that aspect as well.  But I needed a functional, powered switch to the "cut" tracks first, which begat the whole project.

*** This little mini-scene predates everything.  I built it for a module, as a teenager in 1979.  I've updated it a little, but it keeps its original crudity, largely due to the Dockside having been given to me already broken and missing its cylinder saddle.  I always enjoyed the John Allen-esque display of the guts of an actual model engine, though, and the weight's shape makes a useful stand-in for a saddle tank too.  Sadly the cutoff bits from the tank, that had been glued to the module scene, went into the dumpster along with the rest of the modular layout when we abandoned it about 1990. 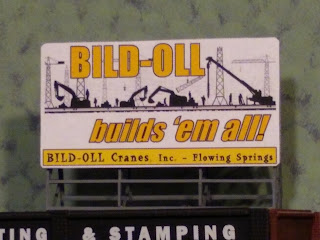 👉 Donations of dead steam engines 👈
for use as rolling scrap
👉 are now proudly accepted! 👈

If you have an old cheapie you'd like to see have a whole 'nother life, please email me.
I've got a few in reserve, but the more variety the better.

Posted by Keith VandeStadt at 10:47 PM