What, me root for Michigan in the Orange Bowl?  Hardly.  Although you do have to give them respect for the devastation wrought upon No. 2 ranked Ohio State a few weeks ago.

But no, the title question relates instead to model railroad lighting.

I am experimenting with changing the lighting in the railroad room from "soft white", a warmish yellow,

to "daylight", a cooler blue.  Want opinions!  Read on for rationale, analysis, and spiritual angst.

In the beginning, the model Earth was without warmth, and void.  And cold gray from fluorescent tubes was upon the face of the layouts.  And God said, "Let there be warm light!"  And there was warm light.

CF bulbs made their debut, and suddenly it was possible to light a model railroad with a cheerier, sunnier "soft white", without roasting your crew with incandescent bulbs, not to mention annihilating your electricity budget.

I seized upon this new technology - back when I cared about new technology - and built 41 "can" spotlights, illuminating the Suffolk Northern in its new quarters with a warm yellow light, at the total draw of a scant 583 watts.

However, it's often cloudy, misty, and dim in the Appalachians.  I painted the sky with a very pale overcast blue.  I painted the backdrop forest working from photos taken on a rainy day in the Blue Ridge - and ended up with a backdrop looking not cheery and sunny, but rather like a rainy day in the Blue Ridge.  And as described in the Trees page, I accidentally created a blue-shifted palette with the foliage, that turned out to coincide nicely with the backdrop.  All blue.

So for a while now I have been looking at that sunny yellow light falling on my blue forest and thinking it just ain't right.  The feeling has been exacerbated by the CF's tendency to both dim and green-shift as they age.

Enter LED bulbs.  Now not only could I cut my wattage in half again, but I had an option to go with a 5000K "daylight" color - about the same Kelvin color temperature as "cool white", actually - but in a screw-base bulb I could use with my existing spotlight cans.  I have had two of them aimed at the summit at Misty, W. Va. for a while, for contrast.

Well after the requisite number of months of ruminating, last week I finally went ahead and ordered enough bulbs to do one of the two rooms.  I started with the west room, the much more mountainous and remote of the two.  I plan to run with the half & half plan for a while, so I can see how I like it  before making a final decision - to either "Go Blue", or roll it back to yellow.

Here are a few before/after shots.  Upon study you can tell some difference in the color of the trees, backdrop, and fascia, but unfortunately the point-and-shoot cell phone pics auto-correct for much of it.  It really makes an impact in person. 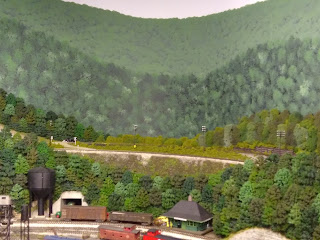 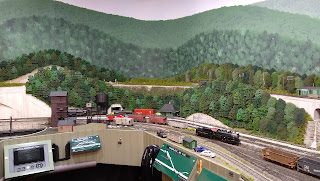 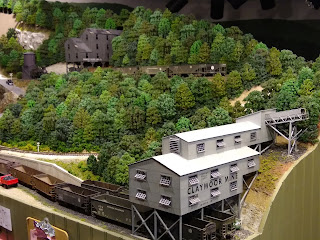 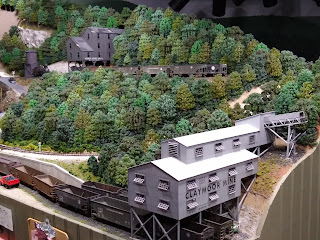 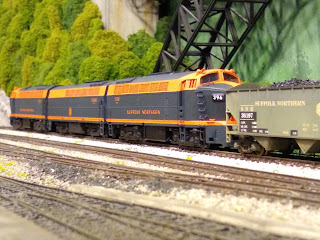 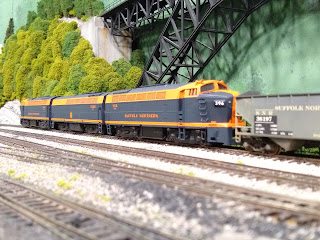 I would be delighted to hear opinions, on both the poor photo comparisons, as well as from ops crewmen once you've actually experienced it.

Here is some early analysis (with expert commentary from the worlds of music, cinema, and literature):
"How blue can you get?"
-- B.B. King, "How Blue Can You Get" (1964)

1.    The bluer color definitely eliminates the clash with the palette of the trees, backdrop, and sky.  Things blend.

2.    The effect is a bit striking.  Maybe I'm just used to the aging CFs, but there's a glare on the layout that is definitely new.

"Too damn vivid."
-- Tom Robbins, Fierce Invalids Home From Hot Climates (2001)
3.    There is a sharper contrast in the colors of the models.  Limestone ballast and concrete definitely jump out at the viewer.  Certain of the trees may as well.  I'm not sure that's either good or bad.
"And Davy Crocket rides around and says it's cool for cats."
-- Squeeze, "Cool For Cats" (1979)
4.    It "feels" cooler in the layout room.  It feels more like what you'd expect up in the mountains.
"That's some cold-___ ____."
-- Samuel L. Jackson, Pulp Fiction (1994)
5.    As a matter of fact it actually is cooler - reducing even the CF bulbs' scant wattage puts out noticeably less heat, which some of my more penguin-oriented friends will appreciate.  The proximity to the utility room means the layout room does heat up a bit when the boiler's a-firin'.
"I love to live so pleasantly...  Lazing on this sunny afternoon."
-- The Kinks, Sunny Afternoon (1966)
6.    There is a mood change in the room.  Before, I'd often turn on some of the layout lights when working at my desk, because the warmer yellow light was just generally happier than the cool white of the fluorescent tube work lights.  It felt less isolated and basement-y.  Whereas the bluer light has eliminated that option, yielding something that feels more like being in an office.  Which as we know, feels like work.  Wasn't expecting the touchy-feely hippie angle - we'll have to see how much of an impact that makes after a bit.
~~~~
OK, so that's where it stands.  What do you think?  What do you light your layout with, and how do you like it?

Posted by Keith VandeStadt at 4:06 PM