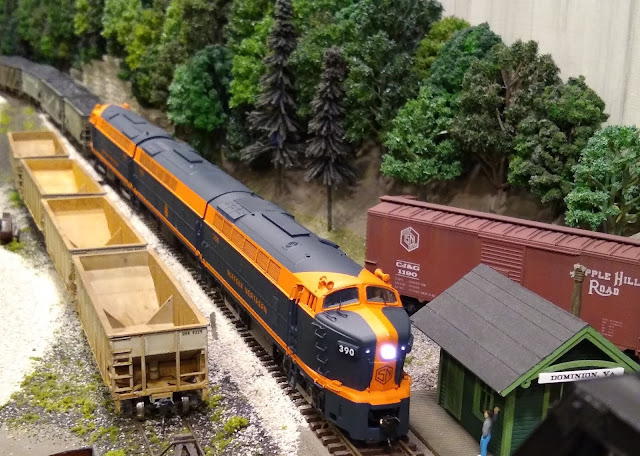 Finally got the painting done on my set of BLI Baldwin Sharks, and got them running on the SNR!

[ Well there's the executive summary.  Below is just a bunch of detail about paint, reliability, and backstory if you're interested.  Hey it wouldn't be the SNR blog without an excess of that. ]

I bought them as an impulse purchase from a BLI sale email several years ago.  I've always loved these things - that pointy schnozz just makes them look like they should be bursting forth from period artwork, brimming with post-war confidence and optimism. 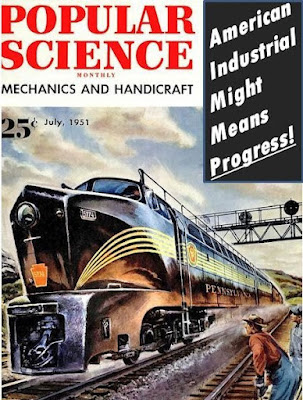 I had resisted pursuing them for the SNR, because I have tried to maintain the "fleet" look by rostering multiples of things, and avoiding the one-offs.  That discipline was easy when there weren't any good models of Sharks out there.  But daggone Broadway Limited has changed that now, as they have on so many fronts - and the "sale" scent made it impossible to resist.

In 1952, the SNR is running road power in 3-unit sets, generally A-B-A for cab units, with the mid-consist engine unpowered.  So I bought two powered A-units, figuring I'd locate a dummy B-unit some other time.

Speaking of "dummy" - it took a fair bit of fruitless searching for that unpowered B-unit before I finally determined that, lo, BLI does not offer the unpowered B-unit as a standalone item.  And, exactly why I passed on buying an A-B combo from the sale flyer in the first place - yes, it was offered - is lost to the cobwebs in my mental attic.  The conclusion?   Dummy.

So the B-unit I used is actually an old Model Power that I had lying around - a long-ago hand-off from my old friend Brian Field (Kentucky & NorthEastern).  I was pleased to discover that the proportions match very well with the BLIs - and once in matching paint and idling between the two As, its low-low-tech detailing actually doesn't stand out too much.

Anyway, in a me-like fashion, I had let the BLIs lie around in their attractive boxes for at least a couple of years, before a looming power shortage finally got me to get them out, and get the sound tuned up to match the fleet.  I test ran them with a number of trains - then put them back into their boxes to await my interest in, and time for, painting them.

[ Another decision lost to the cobwebs in my mental attic is why the λΞЦ I ever thought I didn't want to decal stripes on engines, and that masking would be easier.  But that's the way I went, so my decal sets include only the nose swoop.  The intake and edge stripes, and the cab warbonnet, are left to masking tape, which means I generally procrastinate on painting cab units like there is no tomorrow.  Actually, more like there's nothing but tomorrows. ]

So fast-forward another couple of years, and I finally got disgusted with my procrastination and got on with it.  But at last here they are in service - and typical for BLIs, they sound maahhvelous.  Using a tip from my friend Tom Patterson (Chesapeake Wheeling & Erie), I tuned each A unit to slightly different generator pitches and notch voltages, so that their contrasting sounds would make them stand out from one another. 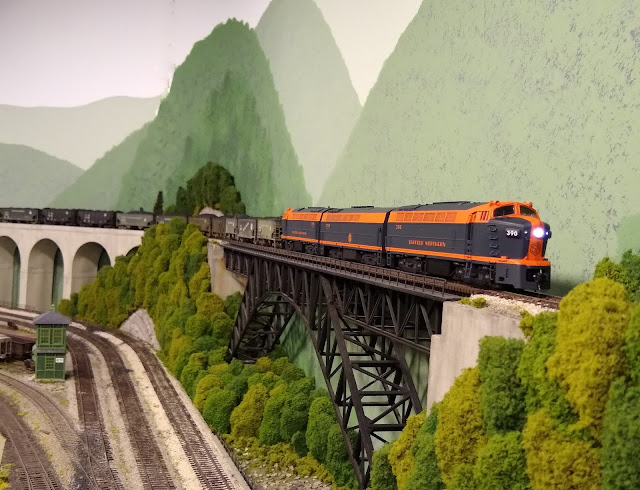 Now, why would there be Baldwin cabs on a predominantly EMD road, you ask?  Well, ya see like many roads, the SNR felt loyalty to one of its major steam builders, and found it just good corporate relations - as well as due diligence - to give a set of their road freight engines a whirl when they were introduced, in 1950.  So after having received 90 F3s in several batches from EMD, the railway ordered up 10 A units and 5 B units from Baldwin.  They fell right into the same freight cab number series as the EMDs, becoming #390-399, with the Bs tagged 390B-394B.

Sadly, while stout haulers, the Baldwins did not compare favorably to the EMDs in terms of reliability.  So with the next order, the railway picked up where it left off with F units, resuming the sequence at #400 and never looking back.  This left the chugging Baldwins adrift in a sea of whirring 2-stroke General Motors cab units. 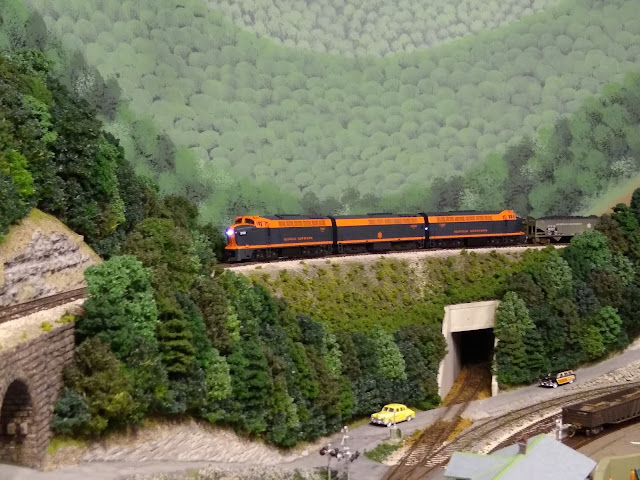 You may notice that the body color is a shade or two darker than the SNR standard "Polly-S C&O Enchantment Blue".  That is because the last diesel project (RS-1 #524) turned out to be a watershed moment in my life, where I had absolutely, positively had enough of screwing with an airbrush.  I have tried for 30+ years to use an airbrush successfully, and it is simply not something I'm wired for.  If it had bolts or nails or solder terminals or screw-tops it would be fine.  But paint is a fluid, and fluids other than hydraulic are non-binary, and therefore completely confounding.  So with #524 I decided - as the blotches once again spattered onto yet another shell - that life was too short to mess any further with things I hated.  So, aerosolized paint thenceforth was just going to have to come from a can.  It's sticky, glossy, and an inch thick, but hey - how much worse can it really be than an airbrush job done with Polly-S jelly, and by me.

So my throwing-down of the spray-paint gauntlet left me with limited choice of colors, and none of them matched the C&O Blue already worn by 31 SNR locomotives.  (I sure showed them!)  I did try several non-railroad colors though, and happened upon Model Master Dark Sea Blue as a pretty decent match in hue to the Polly-S C&O Blue - just a fairly dark shade.  Interestingly it was closer in hue to the SNR livery than Scalecoat II C&O Enchantment Blue was, which itself does a fair job of imitating C&O's original.  Regardless, though, since paint starts fading on the prototype the moment it leaves the shop, I decided that "slightly darker" simply was going to be acceptable.

The stripes are Scalecoat II Reefer Orange.  [ There - thought you could use a short paragraph. 😀 ]

I had first tried the MM Dark Sea Blue on some mail & express cars, and was pleased with ("tolerant of") the results.  Interestingly, one of the factors that helped was that these express cars were just freight cars on high-speed trucks - so I hit them with Testor's Dullcote, rather than the semi-gloss lacquer I had been using on passenger cars and locomotives.  And I was amazed to find that the matte finish tended to catch enough light to actually lighten the shade of blue.

Another interesting discovery is that a dark gray primer also lightened the shade of the top coat, whereas a white primer darkened it.  There is some unfamiliar branch of either physics or sorcery at work there.

As for the Dullcote, I think many of us have noticed, as we've entered the 21st century's second score, that Dullcote in a can has ceased being "dull", so much as "satin".  So I decided that with all of the above factors at work, in addition to both body colors being glossy sprays, that finishing the Sharks with Dullcote instead of semi-gloss made sense.  And they really do seem to blend in pretty well. 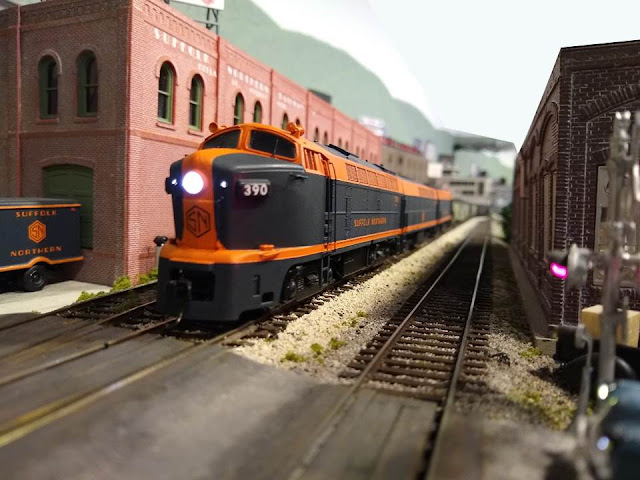 I had been musing for a while that those Sharks would look pretty cool with the standard SNR cab-nose stripe.  I reduced the swoops on the ends to go a little better with the Shark's more angular features, vs. an EMD's.  What I did not expect was how hard that Michael Imperioli-quality beak was going to be to apply a decal to.  Man that thing is so pointy you basically need a butterfly bandage to cover it, like when you slice the end of your thumb off with an Xacto.  Not that I know anything about that.  But anyway, 2-3 decals apiece and a fair bit of filling and straightening with brush paint, and I do think the look is pretty cool.

I let the bodies sit for so long between testing/tuning and painting that I completely forgot that the number boards are lighted.  I painted right over them - and then decaled them too, for good measure.  The GP7s have decaled, illuminated number boards - and I could have had them with the Sharks too, but noooooo.  Not worth fussing with at this stage, however.  It might make a fun mini-project someday, to go back and clean them off, and re-decal.  We'll see - another one for the "Someday When I'm Bored" list.

The Sharks also received the minimalist weathering thus far applied to cab units, which is to grunge up the air intake screens with a little India Ink and pastels, to give them some depth.   The BLIs have nice, see-through separate screens, whereas the Model Power B-unit has the screening cast in relief into the solid shell, old-school.  The slight grunge helps to make the distinction between those two treatments - and thus, the presence of a step-child in the consist - a good deal less obvious I think. 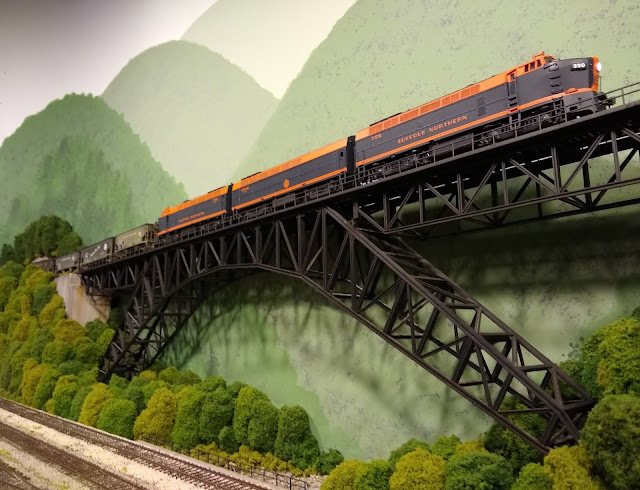 I was discussing the Sharks' legendary unreliability in later (and not-so-later) years with my friend Bob Bartizek (Pennsylvania & Western), and he mentioned that while that was an issue, the PRR loved them for coal service.  Apparently with their low-revving prime movers (the sound cards certainly bear that part out - every throttle notch sounds like about the same RPM) they were torque monsters.  They just dug in and lugged - which was ideal for slow, heavy drags of a material that will not rot if it gets stuck behind a disabled locomotive or several.

The Baldwin reliability question does also raise the Broadway reliability question, though.  I've found these engines, like most BLIs, are very nicely detailed, run smoothly overall, and have terrific sound and features.  I've also found that, like most BLIs, they are picky, and will hit the turf and cry foul on any number of track imperfections that the good ol' anvil engines (Stewart, Atlas/Roco, and Heritage steam) have always just bulldozed through.

They also exhibit schizophrenic electronic behavior, despite being only a couple running hours out of the sealed box.  Already #390 has several times simply left the building, and refused to respond to any throttle or direction commands, requiring a factory reset and re-programming.  And #396 will randomly accelerate to full throttle when asked to slow down.  Luckily it's coupled to #390 which, if it isn't off on its own sit-down strike, is able to restrain #396 while its voltage slowly decays back down to the consist's setting.   My friend Ed Swain (PRR Middle Division) has already embarked on a campaign to replace all his BLI decoders with Tsunami2's, and the SNR may not be far behind - outstanding factory sound characteristics notwithstanding.

All in all though, assuming I can keep them on a leash, I'm pleased with the bit of mid-century-modern variety, amid the hordes of EMD cab units in the SNR fleet. 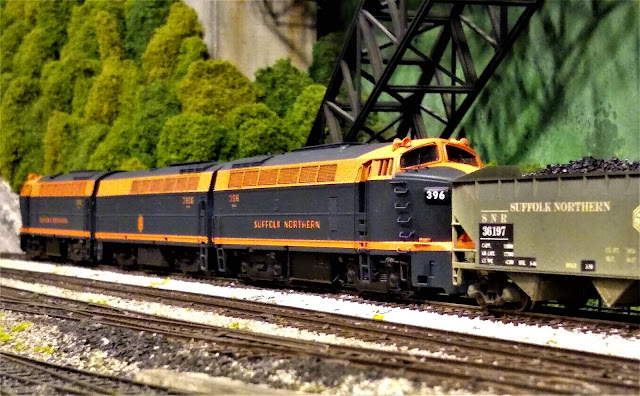 Posted by Keith VandeStadt at 7:25 PM