It's Not Easy Being Green

Included on the SNR page which answers the question "OK, What's Up With Those Trees?" is a discussion of how:

And no, I'm not buying a lottery ticket, since that happenstance used up my entire karma balance in one shot.

So far, so good - so what's the problem?  Well the problem is, that I had already completed a lot of work using Woodland Scenics Light Green ground foam (**see footnote), which, as does nature when the sun hits it, contains a lot more yellow than when seen on a rainy day in the Blue Ridge.

Here's a good example - the scrub brush on the slope of a fill above Bryan Ferry. 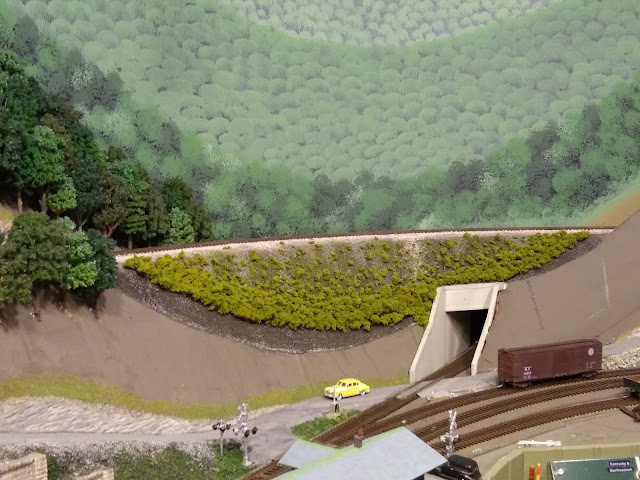 This garish contrast bugged me for years, but not badly enough to rip it out and start over.  (Actually, life is short enough that there really are very few things that ever need to be ripped out and started over.  That's why we have paint, pastels, and backstory to rationalize with.)

I'd made my peace with the small detail areas - weeds generally are yellower than perennial plants, right?  But the big areas, and especially those visible in the same glance as the forest and/or the backdrop, just clashed, man.  A serious eyesore.  Both are green, but miles apart on the spectrum.  As I was working the forest westward from Three Rocks toward that fill, I got to where I couldn't stand it anymore.  Something had to be done (short of ripping it out, but I'll admit I was close).

In the aforementioned Rationalization Toolkit which contains Paint, Pastels, and Backstory, I chose Paint as the best weapon for the circumstances.  But rather than just paint all that ground foam** a bluer green, leaving it bright, crusty, and irregular - why not just use the blue pigment to adjust the green-ish color that was already there?  Yellow + blue = green, right?

So I made up a dye, from a shglorp of blue acrylic paint, and a lot of water.  I kept adding water until the mix was as thin as possible while still able to effect a color change on the ground foam**.  (In reality, I just kept trying mixes until the jar I'd selected was full, and pronounced that mix good.)

Then all that was left was to stipple it on the ground foam**, making sure to mop it back up off the cinders and ballast.  The ground foam** being essentially a sponge, it just soaked up the dye and distributed it pretty evenly.  Although, it is important to keep the stuff at the bottom of the grade drained, as the mix is thin enough that it will eventually run down and settle into the lowest sponges. You can see that effect on the left side below.

At the halfway point, the difference is night and day: 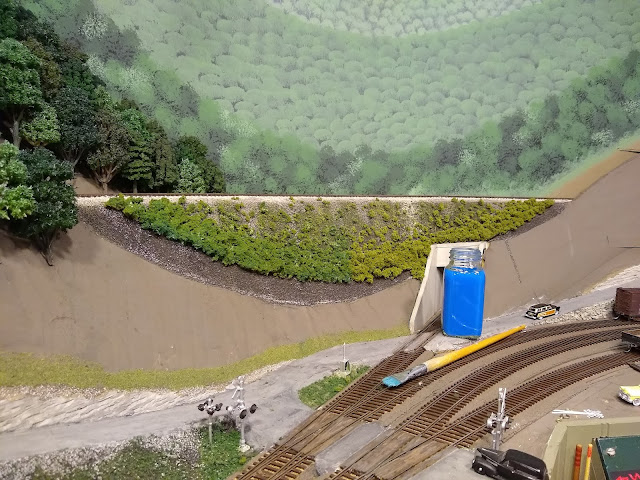 It's a little uneven under close inspection, but hey, it's scenery.  And anyway, no one's nose should be within a couple feet of that fill! 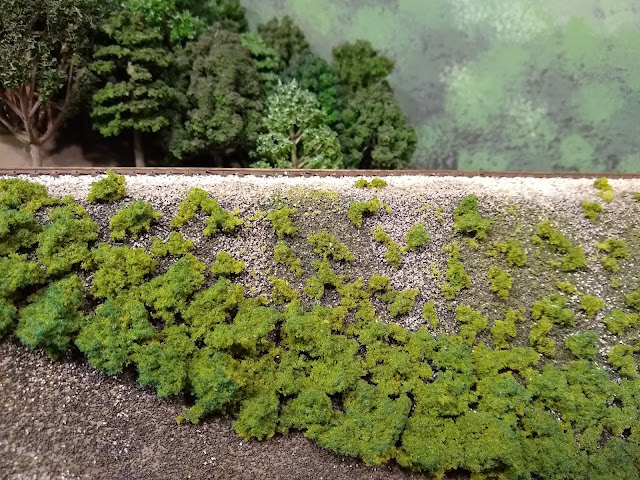 In the overall view, the finished fill slope blends in a great deal better with the forest and backdrop, than the raw Light Green color did.  Enough at least that it no longer jumps out at me and makes my eyes hurt. Next steps include applying the same treatment to several other large swathes of ground foam**, and, completing the forest below this fill and the rest of the scenery at Bryan Ferry.  Thanks for reading.

Here's another one - how long did it take you to notice that "Arby's" is a phonetic play on "R.B."?  As in, "Roast Beef"?  That's just one of those things that occurs to you out of the blue while you're driving along, and you end up saying "oh, yeeeeeeaaaahhhh, I get it!" to the windshield.

Posted by Keith VandeStadt at 8:53 AM