The F.B. Field Co. is a significant SNR customer located in St. Amour, W. Va..  They occupy a disused brewery building whose large, open fermentation room they have repurposed as an erecting floor.   The company supplies a variety of metal products to other businesses, the most noticeable of which are large fabricated assemblies, such as bridge and floor girders, roof trusses, stair sets, etc.. 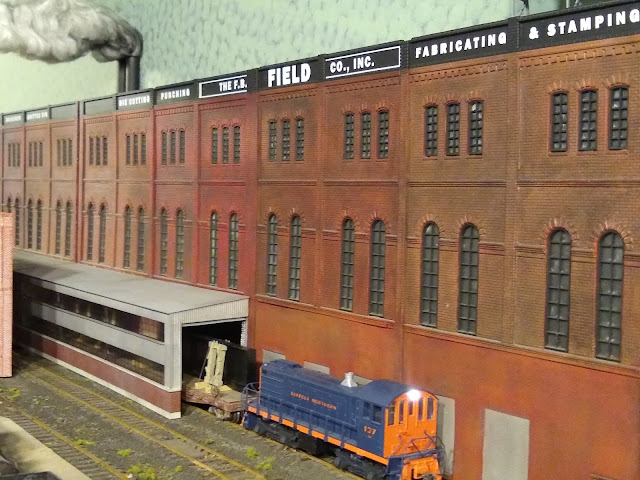 The stamped and dye cut parts go out in boxcars, but the fabricated products leave on flats and in gons - often the same vessels used to deliver inbound coil and plate steel.  Visible open loads appearing to flow out of busy industries is a huge contributing factor to the realism and enjoyment of operations, IMO.

I have a number of fabricated loads which I cycle through for this purpose.  But you can't really ever have too many different loads, can you?  And frankly I'm a little tired seeing the same ones every few months.

So before the op crew starts noticing the repetition, I decided I would get to work on some of the items in the "Flatcar Load Projects" bin.  Well, actually it's a bin, plus a bunch of additional candidates stacked on top of it, and spilling onto the adjacent shelves.  And floor.  Plus some kit box lids full of loose parts, teetering on top of those. You know how it goes.

Anyway, it's important to me to have loads be removable, so that once spotted, cars do not move between sessions -  but their contents change, just like life.  Again, all part of the realism.  So the removable loads lack some of the authenticity that the experts build into fixed loads, but it's a compromise I'm willing to live with.  I try to compensate by having them well blocked and tied down - I find that with at least that level of detail, you don't really notice at first that the restraints are not actually connected to the car.  "Good enough for operations"! 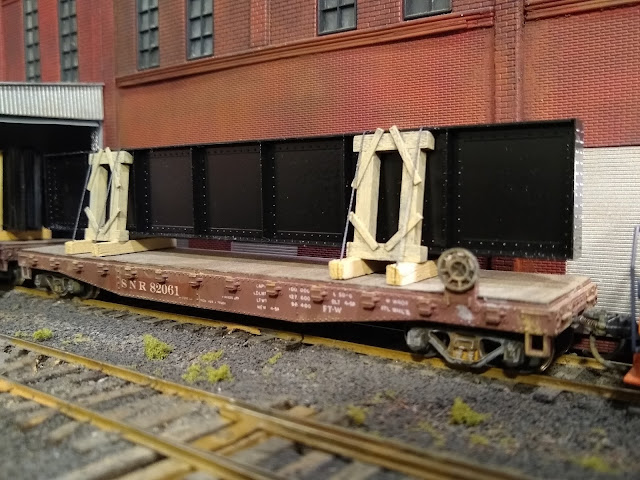 The first is a RTR girder load from SceneMaster, which theoretically should have slipped out of its sealed blister pack and lilted happily onto a waiting flatcar.  Yeah, no.

Ultimately, though, it makes a striking load, and a worthy output from our loyal customer.

The second is another girder load, but this one was about the exact opposite of "ready-to-run". 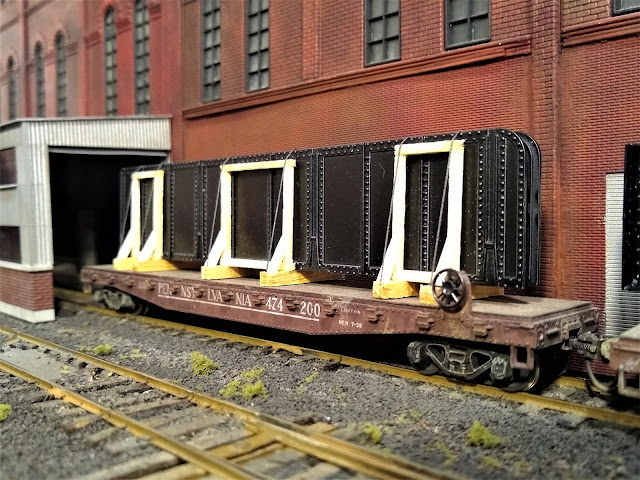 I was over at my friend Dan Hadley's house, operating on his Sierra Northern, and admiring the major new expansion he's working on.  It features a long bridge, which Dan made by affixing one side of a Walthers 90' through-girder bridge kit to the side of the spline roadbed.  But what should I spy in his trash can?  The other girder from that kit!  😱

I mean I admire the man's no-nonsense ability to cut through the crap, and discard that which he doesn't have a known purpose for.  But jeeze - there are a thousand uses for a long bridge girder!  😀 Fortunately Dan disagreed, and had no problem letting me walk out with my new prize.  It was actually this acquisition that got me going on these two new loads.

As its name implies, the girder was 90' long - meaning an easy chop in half made a perfect load for a 50' class gon or flat - with the added interest of there being two segments. Some primer and satin black completed the plastic work.

I rested the girders on the same 1/8" stripwood cross timbers as the other, then built some uprights and diagonals out of 5/64". Just like on the prototype, the strapping's tension properly ties it all together into a single unit, like a truss - yielding a triangular cross-section, with a wide dimension at the base.

As with the other, I dusted the tie-down thread with light grey pastel to simulate steel cable, and anchored the cables to the ends of the cross-timbers.  Also, on this load, I had the luxury of determining the placement, so I set the cross timbers (and cables) to the same spacing as the stake pockets on a flatcar.  This helps with the illusion that the timbers and cables are actually anchored to the car, and not part of a single removable piece. 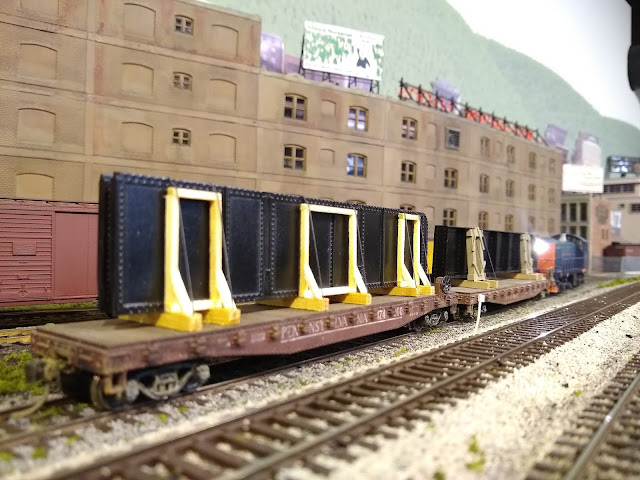 Here #137 is rolling its newfound treasures onto the St. Amour interchange track, ready for YL-1 to carry them off into the commercial fray.

Posted by Keith VandeStadt at 9:33 AM