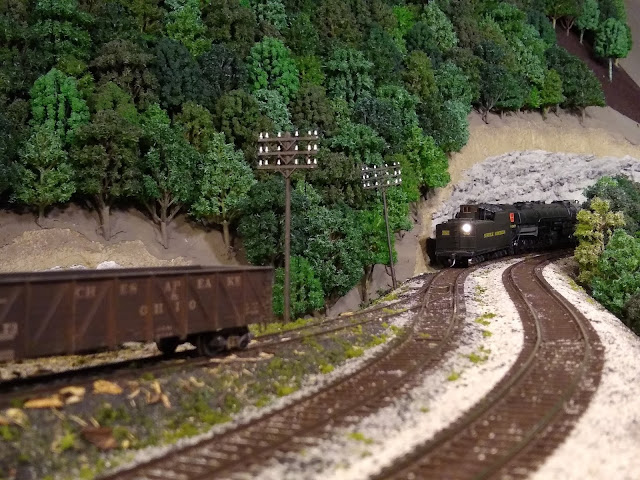 Yaeger-based helper #1107 creeps downgrade on the siding at Mineshaft Gap, W.Va.,
keeping the main clear for a eastbound to pass.

Despite the 3%+ ruling grade on Virginia Hill, there are several customers served off of it, including a coke oven battery, a pulpwood loader, and a modern tipple down a short sub.  So it's always been necessary to provide some method by which a local or shifter crew can hold cars against the grade on the main while switching the level spurs. 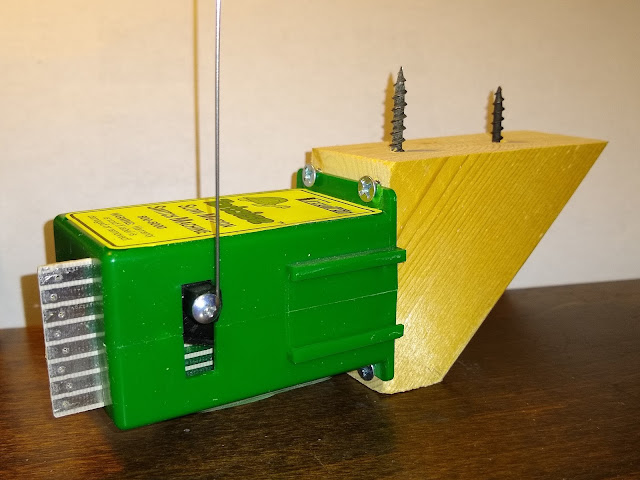 For this purpose I've always used Tortoises mounted at right angles to the roadbed, that can raise or lower a rod to hold cars by the axle - or by any other convenient underbody feature that isn't a coupler. On the SNR these are called "tie-downs", although friends use different terms on their railroads as well, such as "track brakes" and "retainers".

The two crews who switch this district - on YL-9/10, the "Gap Turn", and FS-41/42, the "Claymoor Shifter" - have the added fun of turning their trains via the Mineshaft Gap siding. The siding extends for most of its length up the ruling grade, to, and just over, Carter's Summit.  Two tie-downs have been in place for a while in this area - one on the siding at the lower end, and one on the main at the upper end, west of the summit. 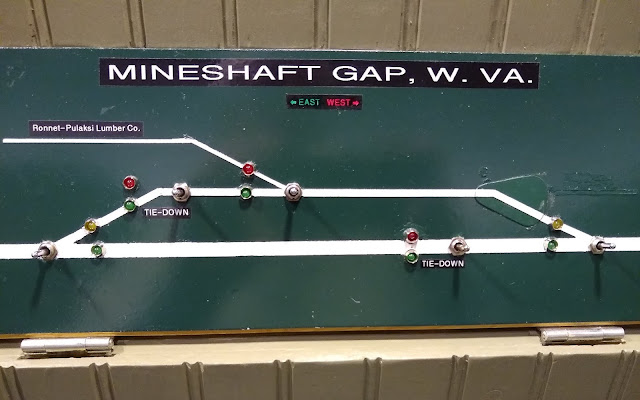 However, if you study the control panel schematic for a minute and imagine the entire thing being on a stiff grade, you'll see that the tie-downs in place are not enough to allow for turning a train, without making a number of extra trips the entire length of the siding.

At the upper (west) end, crews who work the Barrett County interchange on HC-39, "Hadley Loads West", can use the tie-down on the main.  And, they can also leave cars standing on the siding, since it mostly levels out up there, between the west switch and the crest of Carter's Summit, due to the drop in roadbed height coming off of the "high iron".

Whereas at the lower (east) end, seen in the top photo, the 3% grade is in full force, and there's nothing to hold the caboose or other cars left on the main.  Crews have made do by running the caboose all the way to the upper end to park it past the west switch, but then they have to run the consist all the way up as well to retrieve it - four extra laps total.

I have been intending to add a tie-down on the main at the lower end for like, years, but you know about good intentions.  Finally though, staring at the layout with my first cup of coffee one morning this week, I said "(Expletive) it - I just need to get that done."  And I jumped in... First step was to drill a hole and insert a length of brass tubing, to serve as a sleeve for the throw rod.  I located this exactly abreast of the other tie-down on the siding, as denoted by the Mantua milepost to the left.

Fortunately last time I made one of those 90-degree bracket blocks, I made a bunch of them.  So I already had a bracket lying around, as well as a spare Tortoise.  Therefore I was under the layout pulling muscles in my neck in no time. 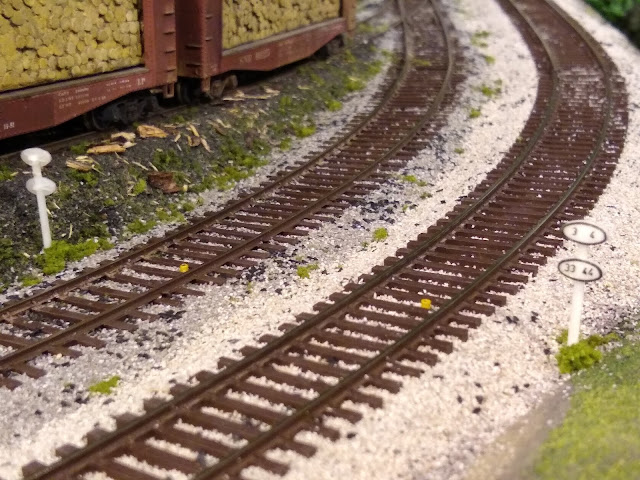 I used this opportunity to paint the tops of the sleeves on all of the tie-downs yellow, so they'd be easier to spot without being too obnoxious - something I'd been thinking about for a while.  And thanks to Jim Rollwage's (UP-Denver Pacific) junk box, I had an additional Mantua milepost to use for the indicator on the mainline side. 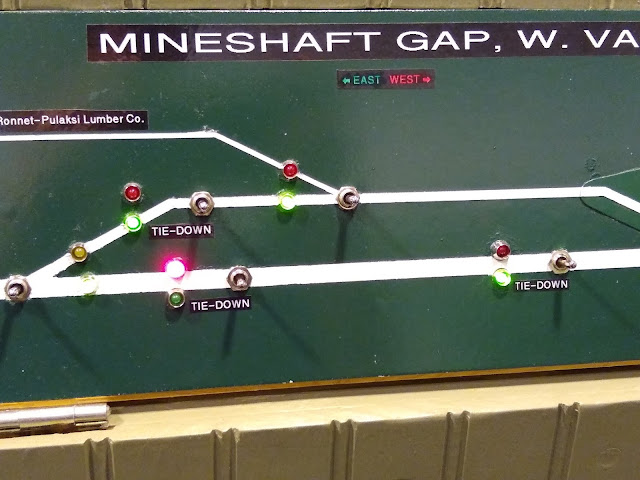 Next I added a toggle and LEDs to the Mineshaft Gap panel, as well as an additional set to the Carter's Summit panel, which is a repeater of this one, located up at the end of the alcove.  Run some cable, solder some connections, and we're in business.  You'd have to wonder why I waited so long! 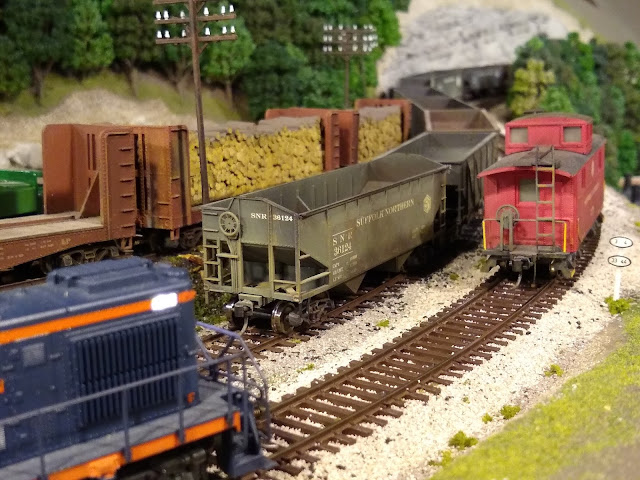 Here's FS-41, the "Claymoor shifter", as the crew turns their train at Mineshaft Gap, utilizing the tie-downs on both the main and the siding.  You can just see the throw rod of the new one, holding the caboose by the last axle.  Whereas, the original tie-down over on the siding is holding the hopper cut by something further up under the last car.  You might not realize how stout the grade is, until you compare the hopper cut to the pulpwood racks - the pulpwood spur is level!
After backing the empties onto the caboose, the crew will be ready to run east as FS-42, and can then switch the Claymoor mine as a trailing-point move.  From there it's back whence they came - to the coal marshalling yard at Cardiff, Va. with the day's loads.

Posted by Keith VandeStadt at 3:21 PM