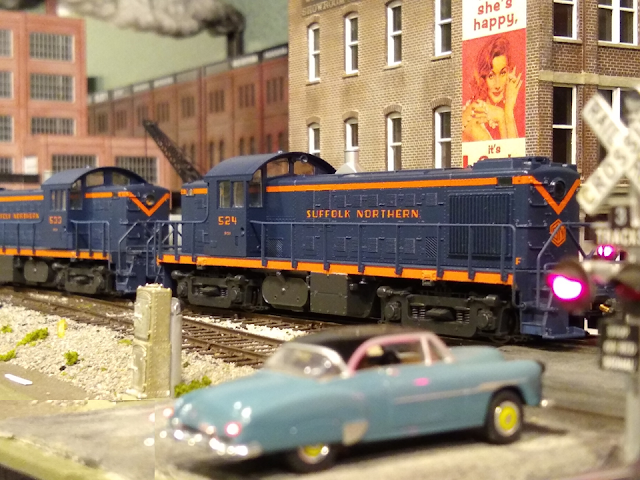 Back in late 1950, or maybe it was early '51, the Yaeger Yard Senior Foreman requisitioned an additional RS1 to handle increasing local traffic loads.  As a sign of respect, and to see if he had a sense of humor, the Road Foreman of Engines sent him #463 instead, one of the railway's four BL2s - employees' least-loved engines system-wide.

While this did help alleviate the motive power shortage in the absolute sense, somewhat, it did not fix one of the nagging problems, which was the RS1s' polishing of their wheels attempting to haul the ever-heavier St. Amour transfers up the Virginia Hill grade.  What was needed was a second engine, in consist.  And since the railway had been converting much of the RS1 fleet to MU capability, the Yaeger Yard Senior Foreman continued his campaigning for an additional engine anyway - specifically, one that would be compatible with the RS1s already on the property.

Well in answer to the local crews' prayers at last, RS1 #524 arrived in Segway, Va. this week.  It was mated immediately with sister #533 - to handle the St. Amour runs, as well as HS-25/26, the Highlands Shifter, which works truck dumps in the district.  The unloved BL2 #463 will yet be defended as protection power - until a different hapless senior foreman at a different yard can be located.

SO WHAT'S THE BIG DEAL

RS1 #524 is the first new diesel I've added to the roster since going to DCC in 2012.  And believe it or not, it's also the first decoder I've ever installed.

See, the Master Of All Things Technical, my old friend Darren Williamson (IHB), had lobbied me for 20 years to convert to DCC.  I had steadfastly refused, because I had gotten the DC cab-and-block working like a well-oiled machine, and I was proud of how well the layout ran with Byzantine technology.

"Madame, I am endeavoring to construct a mnemonic memory circuit
using stone knives and bearskins."
-- Leonard Nimoy as Mr. Spock, Star Trek, "City on the Edge of Forever" (1967)

Darren always referred to this behavior as "the clang factor" - in other words, me as the Luddite, clanging on my solid bronze boilers and exclaiming gleefully at the bell-like tones.

Anyway, as time wore on I had begun to identify some areas in need of improvement (or advancement) in the DC installation, that even I had to admit were becoming significant:

It was #3 that did it.  I was operating on Bill Doll's Forest Park Southern one time, and found myself actually disappointed to pick up a train behind one of the few non-sound engines on the layout.  I realized then how important sound had become to me.  And even better, it made me see that DCC would address all three major items in one implementation.
Despite all the evidence presented above however, being me, I still could not quite be convinced to pull the trigger - due to the prodigious cost, amount of effort, and downtime involved.  So Darren had to sweeten the deal with the agreement to do all of the conversions on my engines to DCC and sound for me.  That was like three dozen engines at least.  Call me today's Tom Sawyer, but the guy lives for this stuff.  Plus, he was starting to lose his mind over our being so far into the 21st century, yet with me still exclaiming gleefully at the bell-like tones of the solid bronze antiquity of it all.  Desperation is a powerful motivator. 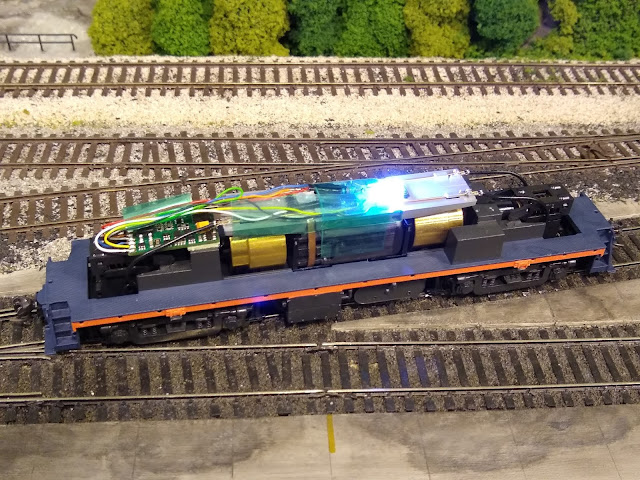 Wudja look at that, it works!
DOIN' IT BY MY LONESOME
So doing up another RS1 years later, as a non-sound engine, provided the opportunity to install a decoder myself, for the first time ever.  And I didn't tell Darren what I was up to, just to prove I could do it - and because I knew that otherwise he'd lobby me to just let him do it anyway, so it would be done right.
I used a Lenz Standard+, which was Darren's spec for non-sound engines that would be consisted with the Tsunamis.  And I'm proud (amazed, really) to say it worked perfectly right off the bench, LEDs and all. I've always felt like I can never thank Darren enough for all the work on the SNR's behalf, so it was time I pulled a little of my own weight.
I have to throw another thank-you, to Tom Patterson (Chesapeake, Wheeling & Erie) for supplying me from his stash, with the goodies I needed minute quantities of for this one lone decoder install - including Tesa tape and microscopic shrink-wrap. 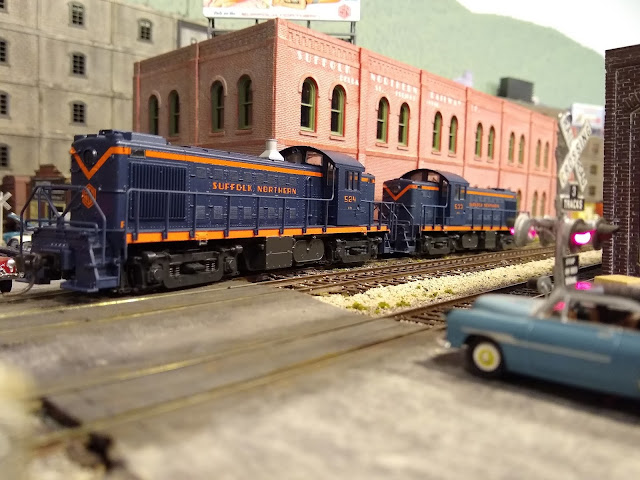 I think the lady in the blue '51 Chevy has had quite enough
of RS1s parading back and forth across Della St..
Number 524 is another Atlas yellow-box RS1 that I bought in the early 90's, probably already used, like the rest of the fleet.  It joins three others on the layout, sisters 528, 530, and 533, which are sound engines.  All of them wear the SNR standard delivery scheme, in Polly-S "C&O Enchantment Blue" and Reefer Orange.
Amazingly, despite their differences in decoders and service histories, I was able to get the two consisted engines to play together nicely just by duplicating 533's speed table and motor settings onto 524, with only a cup of coffee's worth of tweaking.
The original three have been running continuously for nigh on 30 years without a problem, which is why I stick with the old Atlas Roco's (clang!).  However, the engine that became #524 has been sitting in the box for almost that long, and still, upon its re-emergence into the light, from the first volt is has been smooth as silk.  You can bet there are several more of these babies still on the shelf, in reserve!

Posted by Keith VandeStadt at 11:41 AM