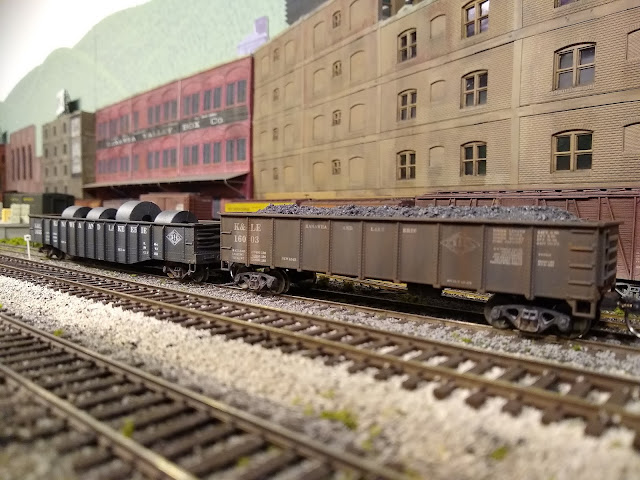 In return I received a "delightfully crappy" K&LE boxcar, backdated for 1952 with that slick, old-school diamond herald. 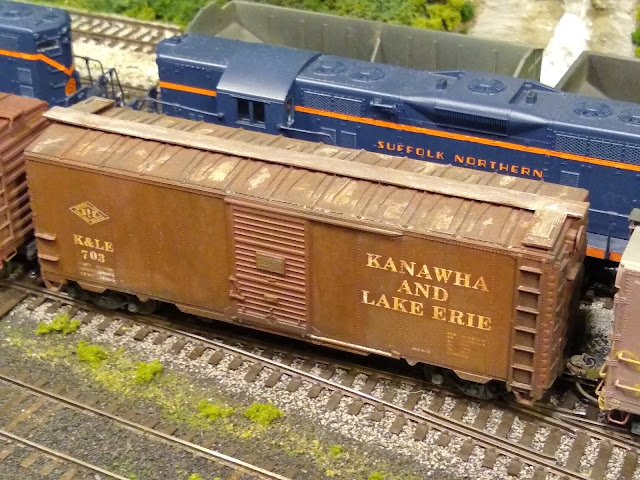 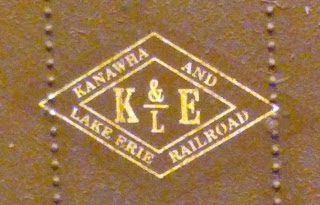 After a while, John asked me if I could spare any of the modern SNR heralds, and especially if I had any smaller ones, as he had in mind a number of variants he wanted to play with as SNR cars, including paint-outs.   No problem, since my old friend and Master Of All Things Technical, Darren Williamson (IHB), has hoarded most of the world's remaining supply of ALPS printers and ink.  I just needed to alter the artwork a little, and have him print a fresh sheet.

I gave this new sheet of modern SNR heralds and lettering to John, and seemingly within minutes, he had created a whole fleet of SNR cars for his layout.  Quite an honor, really.  On the right below is the car I initially did for him; all the remainder are his handiwork.  Photo by Tom Patterson.

It's interesting that John did up a bunch of SNR cars, since at the same time I had a hankering for some K&LE gons.

One of the features of John's layout is a steel mill that literally is 40' long, representing the real Newport Steel, which was once just across the river from Cincinnati, in Newport, Ky..  So when I see "Kanawha & Lake Erie", I think steel, in the same way as when seeing "Pittsburgh & Lake Erie" or "Bessemer & Lake Erie".  Newport Steel would be an ideal customer for coke off of the SNR, and an ideal supplier for the industries in St. Amour that use coiled sheet.

I asked John if he had any more of the older-style decals he could spare, and he gave me all that he had left - which amounted to a couple sets of roadnames in three sizes, with reporting marks, and one, count 'em, one, surviving pair of the diamond heralds.  There was a second pair of heralds, but they were from a misprint run, so had been marked out with a ballpoint pen.

Well, I had two gons on hand that I wanted to donate to the cause.  So I determined I was going to have to use the mark-outs anyway, if they could be cleaned up adequately.  I'm not having visiting freelance equipment without heralds and roadnames! 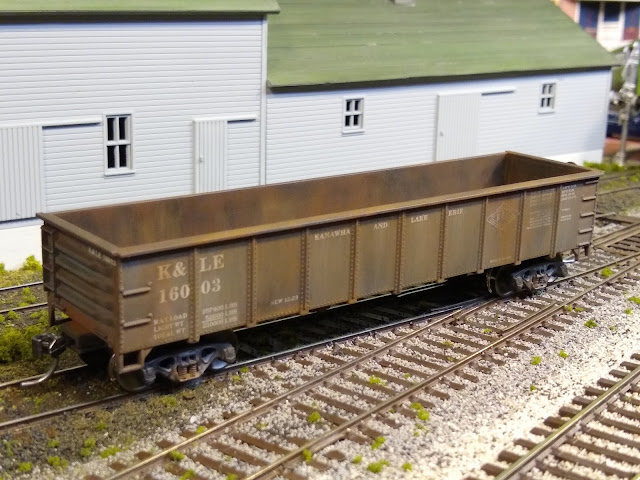 The first gon was a modern issuance of the traditional Model Die Casting/Roundhouse 40' bathtub.  It was black and decorated in the minimalist Erie scheme.  Perfect for making data-only cars by just a little painting-over, as I've done on a couple dozen hoppers.

This however was a very old scheme, with old-school, pre-AAR-format dimensional data.  So I determined this would be the right car to use the mark-out heralds on - I could keep the all the pretty data stencils, and weather the hell out of it, since painted like that it would be seriously in need of shopping in 1952.  I could then use the heavy weathering to hide the mis-print in the heralds.

So other than the K&LE lettering, paint on the trucks and wheel faces, and a thick mantle of pastels, this one is straight out of the box and into the rotation.  SNR uses a fleet of a dozen of these bathtubs, about half home-road - to serve the coke works in Claymoor, and for other aggregate service such as limestone, gravel, and pig iron.  They are also available for occasional mill and scrap loading. 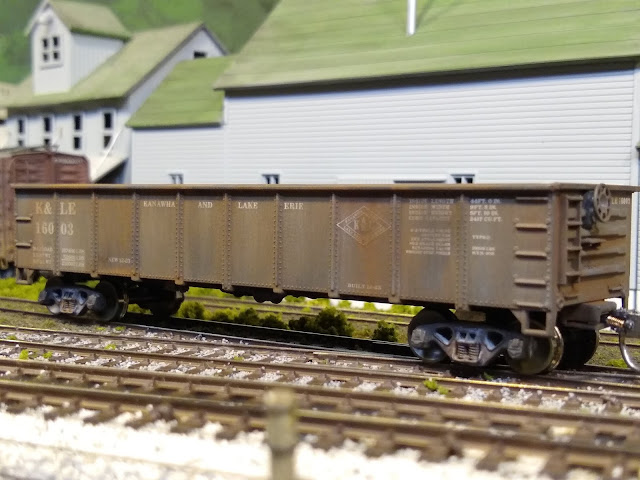 I did not initially intend to use the teeny roadname, however the intermediate size roadname would only fit two letters per panel.  On a 40' car, that meant I'd run out of panels before I ran out of roadname.  So, since there are other examples out there of gons lettered with teeny roadnames (C&O is one), I figured I'd just use the smallest size here.  It's actually a pretty neat look I think. 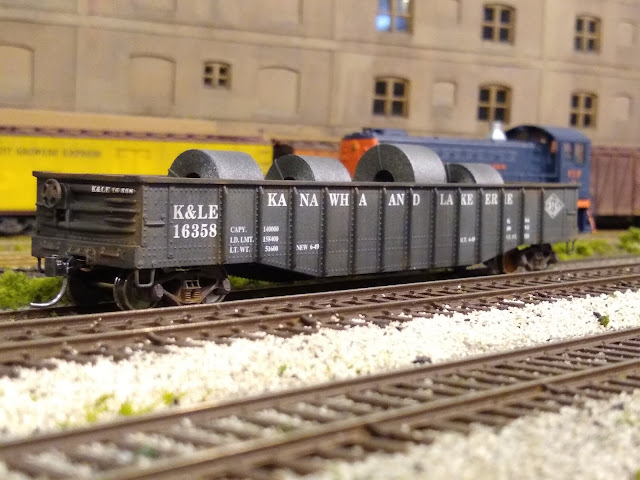 Now, this - this - is what I'd been picturing a K&LE gondola on the SNR looking like:  a mill gon loaded with coils from the rolling mill in Newport, headed for either Field Fabricating or the Combustioneer plant in St. Amour... with that loooooooong roadname playing hopskotch with the ribs all the way down the side.

It happened that the other gondola I had on hand was a standard Athearn 50' mill gon.  I know, I know, these are foobies because they don't have ribs over the bolsters, and would fold up on themselves.  Yeah yeah, I still love the proportions of them, and, they run great (once you glue a couple tons of skeet shot into the belly), which is the foremost criterion on the SNR.  It'll be OK to use it - there are only a couple others on the layout.

This car was silver and decorated for the Southern, so it was going to need a full paint job and a complete set of decals.  And hooooo, boy, with that many ribs we are talking about a lot of teeny decal pieces.  Below is what happens when a decal sheet is innocently walking along and steps on a land mine: 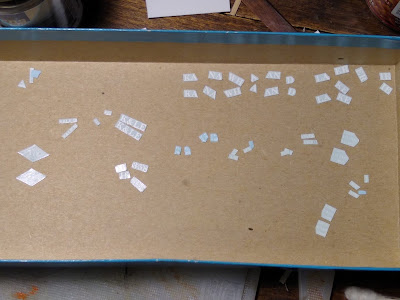 Even so, I was pleased at how comparatively easy it was to get the decal shards lined up - especially the roadname segments - with minimal eye strain or migraine.

This car also received a set of new stirrups, Intermountain wheelsets, metal couplers, and Tichy trucks to replace the beautiful-but-unreliable sprung trucks it had been riding on when I bought it. 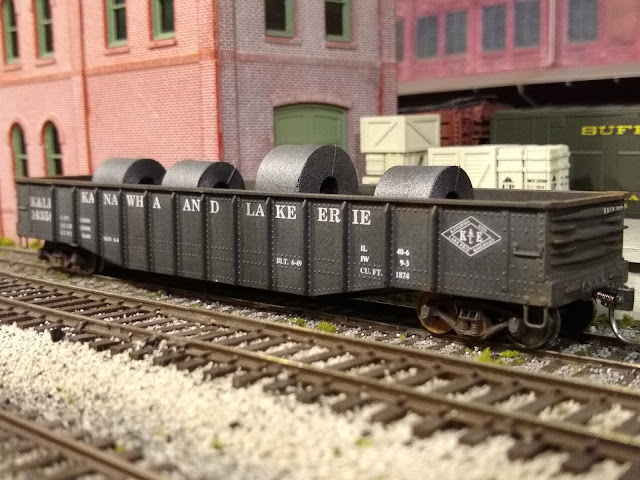 With this design I could have picked any build date from the 30s into the 50s.  I settled on 6-49, so it would have only light weathering and could best show off those boss K&LE diamond heralds.  Even in three years though, this one has managed to get a replacement wheel already.  Must have cracked from the heavy service!

These guys hit the rails a week ago, and are already active in the switchlist system.  16003 even got billed already, heading empty to Downey & Moss, for a load of coke to feed the furnaces at Newport.

Posted by Keith VandeStadt at 6:31 PM