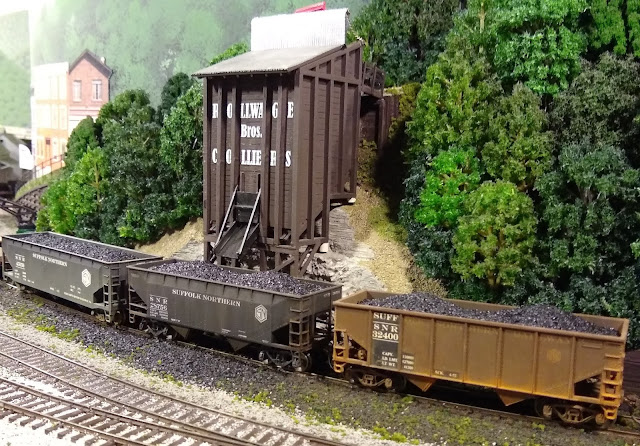 Cars full of "black diamonds" wait to be picked up from the Rollwage Bros. truck dump in Three Rocks, W.Va..

"In the beginning,
The coal was without form, and void,
And darkness was upon the face of the fleet."

A while back, after the SNR had been in operation for 15 years or so, I began to notice that the coal loads had accumulated a fair bit of dust, and were more gray than black.

I use mostly resin loads, with some plastic ones covered with coal or more often, cinders.  All of them are removable, so empties can be loaded at the mines, and unloaded in staging or at the consumer.  So I scrubbed all of them down with Dawn and a toothbrush, and then painted them all (except the real coal ones) with Home Depot's finest one-buck flat black.

The difference was very noticeable.  All the coal was black again, and consistent - and I was deeply proud of my ingenuity and dedication.  A man of action - oh yes, that's me.

At a subsequent operating session, I was describing this to my friend Jim Rollwage (UP/Denver Pacific), who observed that I should try using gloss black, since coal is, for the most part, shiny.

Jim is a good modeler and a wise man, and I have known him for decades.  You would think that I'd have given credence to his advice.  But no.  Remember, I'm a man of action.  Gloss black would have required re-work, and the reversal of a decision!

So another 10-15 years have gone by now, and the loads are looking a bit gray again.  The other day, Jim and Gerry Albers (Virginian Deepwater District) were discussing ways to clean up their real-coal loads, which had also gotten dusty.  Their ingenious method was to clean the loads using Pledge furniture polish.

I tried this on some on the resin loads.  Results were underwhelming, because the relief is so deep, whereas it worked perfectly for Jim & Gerry on the real-coal loads.  However the conversation had gotten me to thinking about trying gloss black again on the resin loads.  The more I stared at them, the more the SNR's loads looked like peat moss, rather than "fire rock".

So I did a test run.

"And Jim said,
Let there be light!
And there was light."

Behold!  The difference, just as in Genesis, was night and day. 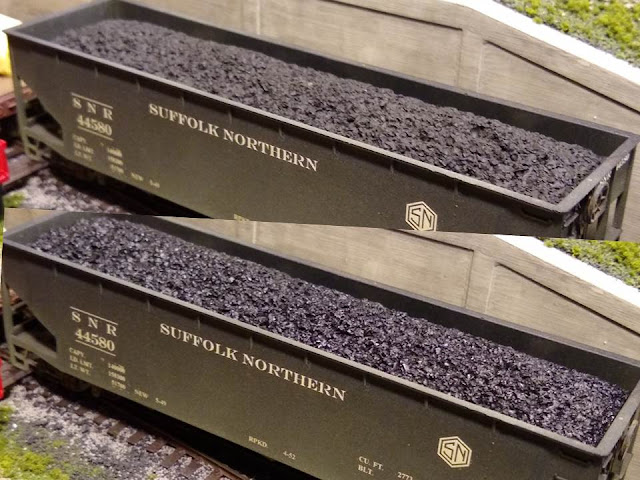 With the flat black, especially with dust, the loads tended to blend in with the cars themselves.  Everything was one of the 50 shades gray, with a uniform matte finish.  Whereas, since the resin loads have a great deal of surface texture, the gloss black highlights individual facets that are spread evenly throughout the car, making the overall pile come alive, just like "black diamonds".

The effect is distinct, but still subtle.  The secret is moderation, especially on loads with less texture - like those I'd made with cinder ground cover.  A lighter overspray did the trick and avoided the "golf ball".

I've completed the entire stock now, and am really happy with the results.

Below are a few before-and-after scenes.  The trains are unmoved in each pair of photos, and the cars and even the loads are exactly the same.  The only difference is the loads were removed and given an overspray of gloss black.  To me it makes the coal "pop", like it didn't with the flat.  Looks a lot more like pictures from the day.  Video is < 30 seconds.

Posted by Keith VandeStadt at 8:58 PM